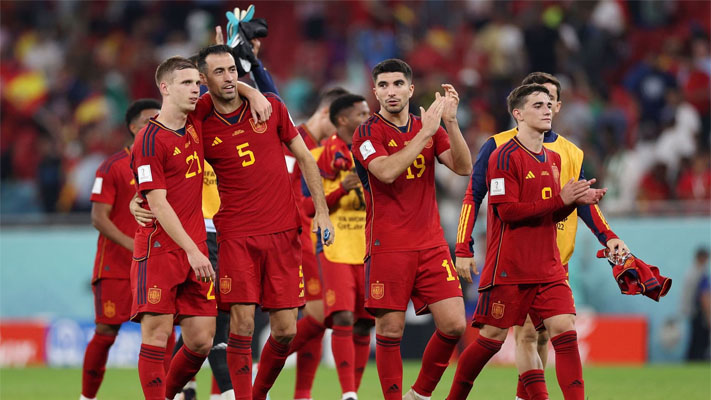 Spain hammered Costa Rica 7-0 in their opening game in the 2022 FIFA World Cup.

La Roja entered this contest on the back of four wins and one defeat in their last five games across competitions. Luis Enrique picked a squad filled with youth as well as experience as he looked to take his side deep into the tournament.

Costa Rica, on the other hand, arrive in Qatar having won four and drawn one of their last five games across competitions. They were looking to continue the trend of minnows upsetting the big teams.

Spain hit the ground running from the get-go and looked sharp from the start as they barely allowed Costa Rica time on the ball. They kept a jaw-dropping 85% possession in the first half and attempted seven shots with three on target. Their opponents, however, could not even attempt a single shot.

La Roja made the most of their time on the ball as they opened the scoring just 11 minutes into the game. The ball fell to Dani Olmo, who was in a great position in the box. He turned to face the goal and used his body to shield the ball, before delicately lifting it over the onrushing Keylor Navas. Jordi Alba then played a low cross for Marco Asensio to make it 2-0 10 minutes later with a first-time shot.

Ferran Torres was awarded a penalty 10 minutes later and made no mistake as he made it 3-0. Spain carried a comfortable lead into half-time.

Having already raced into a three-goal lead, many would have expected Spain to take their foot off the gas and allow Costa Rica some space. However, they maintained their ruthlessness in the second period, dominating possession 78% to Costa RIca’s 22%. They also did not allow their opponents to take a single shot, similar to the first half.

La Roja, on the other hand, extended their lead just nine minutes after the restart. Torres found himself in a good position and scored to make it a brace for himself and 4-0 to his team. Both managers then turned to their respective benches as they made several alterations.

Gavi scored his first-ever World Cup goal as Alvaro Morata set him up in the 74th minute. Carlos Soler scored the sixth goal in second-half stoppage time and Morata grabbed one for himself in the dying embers. Spain were relentless as they defeated Costa Rica 7-0 in a statement victory.

On that note, let’s take a look at the five talking points from the game.

#5. Spain took the game away from Costa Rica by keeping possession

As seen from the statistics chart, Spain kept the ball for nearly three-fourths of the entire duration of the game. They had possession for 85% of the first half, allowing Costa Rica the ball for just 15% of the time. La Roja did not even allow their opponents a single shot in the first period.

#4. Spanish players were clinical in front of goal

Spain put in one of the most ruthless yet efficient displays of attacking football in recent history. Usually, when teams win big, they do so by attempting a high number of shots for their goals. However, Spain were also very clinical as they attempted several shots.

#3. Keylor Navas had a night to forget

Navas, who has been one of the greatest goalkeepers in club football for Real Madrid and Paris Saint-Germain for the past decade, had a night to forget.

He faced eight shots but could only stop one of them as he conceded seven goals, his worst performance while playing for Costa Rica.

#2. Spain could be a dark horse to win the World Cup

If anything, the last few days have shown us how the pressure of competing at the World Cup and the fans’ expectations to win the cup can weigh a team down. First, Argentina fell 2-1 to Saudi Arabia despite not allowing their opponents a single shot in the first half. Japan then completed a stunning comeback to stun Germany 2-1 earlier today.

Many expected Spain to comfortably grab the runners-up spot in Group E but after today’s result they look set to win the group. This will allow them an easier draw and they will be licking their lips as the prospect of going all the way in this World Cup.

Despite not bringing an out and out striker with them for this tournament, Spain seemed to not have any issues playing without one. Morata started from the bench as Marco Asensio, Dani Olmo and Ferran Torres were trusted with the job of scoring goals.

All three of them got on the scoresheet, with Torres even grabbing a brace. Gavi scored in the second half and was accompanied by substitutes Carlos Soler and Alvaro Morata as they completed a demolition job.