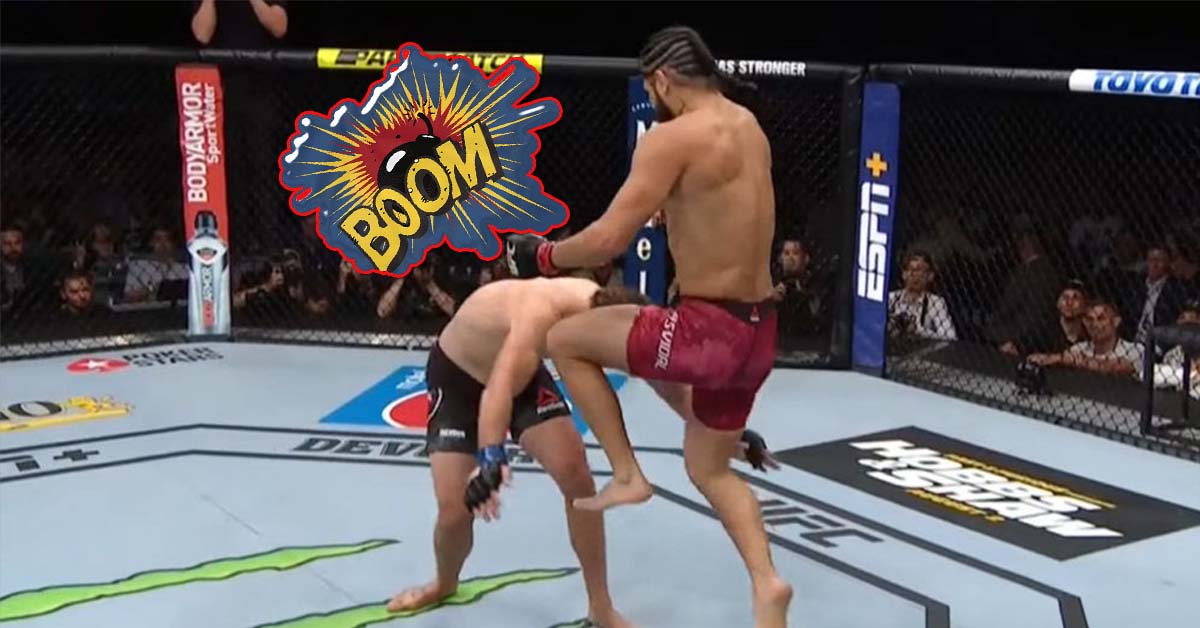 Since the inception of the UFC in 1993, the level of striking in MMA has continued to evolve with every passing year. Wrestlers and grapplers dominated the sport for the longest time, before strikers started finding effective tools to avoid getting taken down to the mat.

The flying knee has emerged as a useful tool against wrestlers, who like to attack their opponent’s legs or hips. The knee is one of the hardest parts of the human body. A perfectly timed flying knee can knock out any poor soul who finds themselves on the receiving end.

Tai Tuivasa’s best performance in the UFC octagon came on his promotional debut. He became the heavyweight champion of Australia’s premier MMA organization, AFC, in just his fifth professional fight and subsequently defended his title in his sixth pro bout before signing with the UFC.

In his UFC debut, he took on Rashad Coulter at UFC Fight Night 121. The event went down at the Quodos Bank Arena in Sydney, Australia, which is Tuivasa’s home city. ‘Bam Bam’ looked jittery in the first few minutes, but his nerves seemingly settled as the fight progressed.

Tuivasa patiently walked Coulter down and landed a couple of heavy calf-kicks. Four-and-a-half minutes into the first round, he landed another powerful calf-kick that dropped his opponent. As his American counterpart got back to his feet, the Aussie heavyweight took flight and landed a perfectly placed flying knee to knock him out.

Tai Tuivasa’s first fight in the UFC produced one of the best knockouts of his career so far. Flying knee KOs are already a rare entity in MMA and seeing a 265-pound heavyweight pull it off is truly a sight to behold.

His win over Rashad Coulter sent the Australian crowd in attendance into a frenzy. After the bout, fans got their first look at the now-infamous shoey.

Back in 2016, Edson Barboza was on his way up the ranks in the UFC lightweight division. Following back-to-back unanimous decision victories over Anthony Pettis and Gilbert Melendez, Barboza was eyeing his third win on the bounce going into his bout against Beneil Dariush at UFC Fight Night 106.

Both fighters’ routes to victory were fairly obvious. Most were of the opinion that Dariush will have to take the fight down to the mat and look for submissions, with Barboza likely looking for a knockout on the feet.

Surprisingly, Dariush opted to stand and bang with the lethal Brazilian striker. He walked Barboza down for as long as the fight lasted, allowing ‘Junior’ to pick his moment to unleash a powerful strike with his opponent coming in.

Three-and-a-half minutes into the second round, Barboza uncorked a perfectly timed flying knee to put Dariush to sleep.

On the main card of UFC 205, one of the biggest pay-per-views in the history of MMA, two top-ranked middleweight contenders locked horns with a potential title shot on the line.

Chris Weidman, the former champion, was looking to return to winning ways after suffering the first loss of his pro career against Luke Rockhold in his last outing. The American took on Cuban powerhouse and former Olympian Yoel Romero, with both fighters eyeing a shot at Michael Bisping’s middleweight strap.

The first two rounds were very competitive, with both fighters enjoying success at various points in the opening 10 minutes. Weidman was primarily looking for takedowns, but Romero was stuffing all of the American’s attempts. Meanwhile, ‘The Soldier of God’ was being patient and waiting for the right moment to explode.

24 seconds into the third round, Weidman shot in for another takedown. His jaw was met with a powerful flying knee, which knocked him out cold. Romero landed a few follow-up shots before the referee stepped in.

Cory Sandhagen is one of the more interesting fighters in the UFC’s bantamweight division. The highly skilled fighter hailing from Colorado has enjoyed a decent ascent up the rankings at 135 pounds.

He secured three finishes in his first three bouts in the promotion and followed them up with two decision victories. In his next bout, he succumbed to a fast submission loss to Aljamain Sterling at UFC 250.

His loss to Sterling brought about a change in his approach to mental preparation going into fights. This was on display when he secured a TKO victory over Marlon Moraes in his next octagon outing. Sandhagen was a lot more aggressive in his fight against the Brazilian and wasn’t shy in showcasing his plethora of devastating strikes.

He carried the same mentality into his fight against UFC legend Frankie Edgar.

Frankie Edgar was expected to be a tough task for Cory Sandhagan considering his wrestling credentials and achievements in higher weight classes. However, what transpired at the UFC Apex when the duo locked horns left MMA fans around the world in utter disbelief.

Sandhagen used impeccable movement and timing to draw Edgar towards him before unleashing a vicious flying knee. The knee landed flush onto the chin of the former UFC lightweight champion, putting him to sleep.

Ben Askren was one of the most talked about fighters in MMA in 2019. Askren put together a perfect record of 18-0 outside of MMA’s premier promotion, winning the welterweight titles in notable promotions like Bellator and ONE Championship.

In a sensational trade between the UFC and ONE, Askren joined the world’s premier MMA organization with former flyweight champion Demetrious Johnson heading the other way. In his first bout in the famed octagon, ‘Funky’ took on Robbie Lawler. He somewhat controversially won a submission win on the night to take his record to 19-0.

Seemingly one win away from a championship opportunity, the wrestling phenom took on MMA veteran Jorge Masvidal at UFC 239.

Ben Askren’s path to victory was as clear as day. He was never known for his striking prowess and was smart enough to know that wrestling was the easiest route to getting the win. Masvidal is primarily a striker, making him the perfect stylistic matchup for Askren.

However, Masvidal turned the world on its head, producing one of the greatest knockouts in the history of combat sports. As soon as the fight started, ‘Gamebred’ sprinted at Askren, knowing full well that the former wrestling champion would shoot for a takedown. At full speed, he met ‘Funky’ in the center of the octagon with a thunderous flying knee, which knocked him out just five seconds into the bout.

The five-second flying knee effectively ended Askren’s career. He would fight just one more time, a submission loss to Damian Maia, before retiring. Meanwhile, Masvidal has emerged as one of the biggest stars in the sport off the back of the sensational KO.

Interestingly, days after his knockout victory over Askren, videos surfaced online of Masvidal drilling the eventual fight-ending strike two days before their fight.