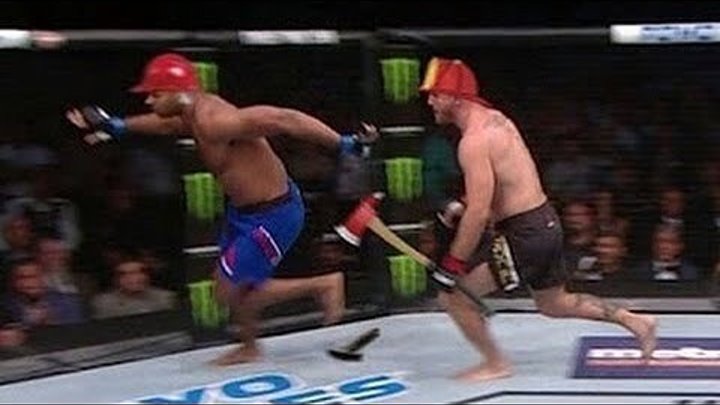 At that time, another UFC debutant, Shane Burgos, made a bet with his coaches. The agreement was as follows: if Burgos loses the first five minutes, then right in the break between rounds, the corners cut his hair. Shane lost the first round, and for the first time in UFC history, a fighter had his hair changed during a fight. By the way, as a result, Burgos still won in his debut fight in the UFC.

This fight took place at the UFC Fight Night London tournament in February 2016. At the end of the third round, Silva seized the initiative and delivered several accurate punches. In one of the exchanges, Bisping dropped his mouthguard and instead of continuing to defend, he got distracted and began to show the referee that he did not have a mouthguard. At this time, Anderson struck a beautiful jump with a knee, and sent Bisping to the canvas. At the same time the gong sounded, and Silva and his corners began to celebrate the victory. As it turned out, Bisping was simply “saved” by the gong and the fight should continue. The referee and the seconds had to explain for a long time to Silva that he should go to the 4th round. In that fight, Bisping won by unanimous decision, with which many MMA fans disagreed.

In September 2016 at UFC 203, heavyweight champion Stipe Miocic made his first title defense against Alistair Overeem. Overeem even managed to knock down the champion, but nevertheless, being wary of hard blows by Miocic, Alistair tried to work as number two and catch his opponent on counterattacks. In one of the episodes of the first round, a funny moment happened: Overeem literally began to run away from the opponent, and the angry Miocic continued to chase him. This episode became the occasion for many Internet memes and really amused fans of MMA, but Stipe still managed to overtake the opponent and win by knockout in the first round.

In addition to bright fights, the Diaz brothers are also famous for the fact that during the fight they like to demonstrate various kinds of antics that only fuel the interest of the public. This happened during Nate’s second fight with Conor McGregor. Conor’s coach, John Kavanagh, said that in one of the episodes of the battle there was a funny incident.

“Conor started playing too long in a fight and skipping punches. At one point they stood in a clinch right next to me, Nate pressed him to the net and I yelled that Conor would follow the plan for the fight. Nate looked at me, showed his trademark gesture and sent me and my plan to hell. It made me laugh a lot“

5 funny and ridiculous moments in MMA fights. And Finally

Charles Bennett is known on the Internet as “the most reckless MMA fighter”. And although he does not have an impressive record (Bennett’s statistics are 30-41), in his fights he sometimes gets up to such a thing that many MMA fans do not fit into their heads. So in the first seconds of the fight against Shad Smith in February 2004, Bennett climbed onto the cage, starting to tease his opponent, and got out of there only after the referee persuaded him. A few seconds after Charles got off the cage, he knocked out his opponent. It all looked so crazy that it drew even more attention to Bennett’s persona.

Thank you for watching to the end. Have a nice day!