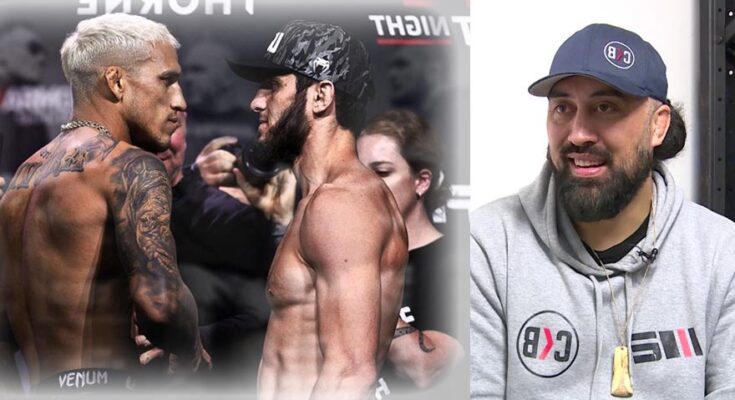 Eugene Bareman, the trainer of UFC middleweight champion Israel Adesanya, doubts that top lightweight Islam Makhachev will get a chance to fight for the vacant title in his division in his next fight.

Eugene Bareman believes the UFC might leave the Russian out of the title fight, as his style is not the most interesting for mixed martial arts fans.

The City Kickboxing head coach is of the opinion that Makhachev will have a tough time convincing the UFC brass to award him a championship opportunity due to his fighting style. During a recent interview with Submission Radio, Bareman said:

“Should Islam be the next person that challenges for the title? You know, he probably does deserve it, but whether he’s getting that title shot is another thing. It’s another question, you know. Like, the UFC is a business and it’s a business of making fans sell tickets to watch fights, and Islam doesn’t have the most crowd-pleasing style. So his road to the title is just to keep winning and winning and winning and eventually you just can’t deny him.”

Islam Makhachev is currently on an impressive 10-fight winning streak, the second-longest string of victories in the division. The only one with a longer streak than him is former lightweight titleholder Charles Oliveira, who has won 11 straight.

However, the Dagestani is not necessarily the biggest fan-favorite. Due to his dominant grappling-heavy style, Islam Makhachev has been deemed “boring” by some fans and fellow fighters.

Another case against Islam Makhachev’s title aspirations is that he hasn’t fought many top contenders during his streak.

It’s through no fault of his own, though. The Russian was scheduled to fight No.6-ranked Beneil Dariush earlier this year, but Dariush was forced to pull out due to injury.

As a result, Makhachev ended up fighting unranked Bobby Green in the main event of UFC Fight Night 202.

With that being the case, UFC president Dana White admitted that rebooking Makhachev vs. Dariush is still on the table. During the UFC 274 presser, White said:

“Who doesn’t think Dariush and Islam is a great fight? It’s a f*cking killer fight. I would love to see that fight to see who the No. 1 contender is, but I’m not gonna lie, after tonight I wouldn’t mind doing Islam vs. Oliveira, either. We’ll see what happens.”