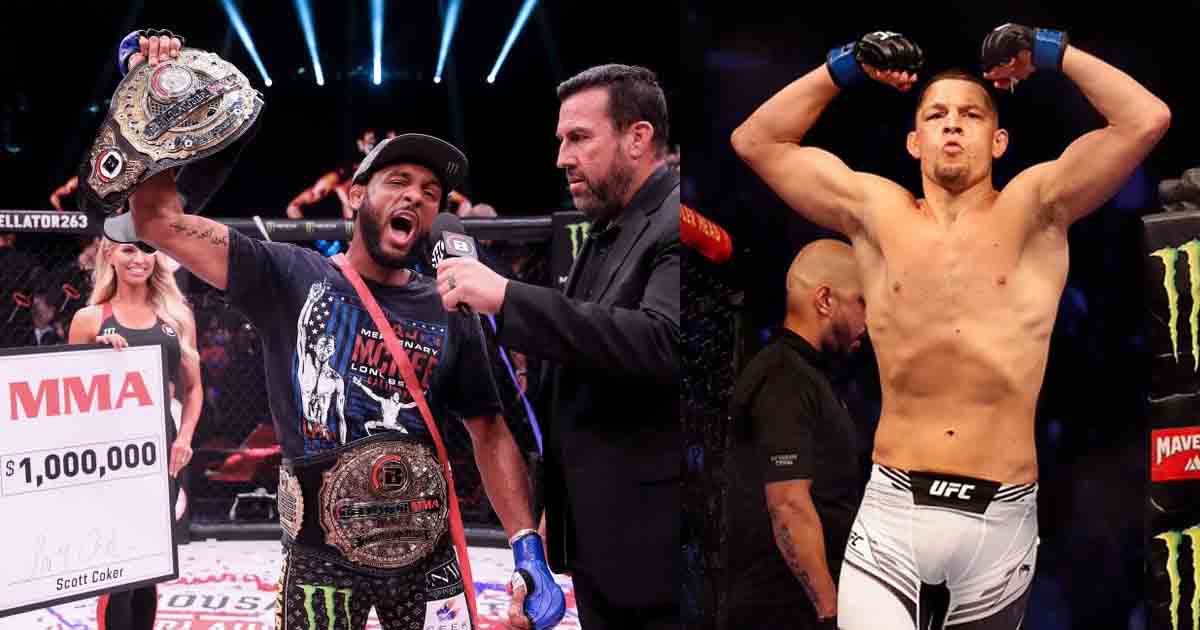 AJ McKee recently stated that he wants Nate Diaz to join Bellator MMA and would “love” a fight with the UFC star.

The Bellator featherweight champion spoke with MMA Island about his desire to become a professional race car driver and his upcoming rematch with Patricio Freire at Bellator 277.

At one point during the discussion, McKee was also asked about his thoughts on fighting Nate Diaz if the UFC veteran happens to sign for Bellator. In response, ‘Mercenary’ stated that he would be delighted to fight the Stockton native:

“Bring that a** here boy! [laughs] Um, I would love to fight Nate. I feel like that would be my first fight into like stardom. You know what I mean. That’d be a first superstar fight.”

Further into the conversation, McKee spoke about a matchup with UFC featherweight champion Alexander Volkanovski:

“Obviously Volkanovski is in my weight class. See who the real pound-for-pound is, you know. Unify the belt, that’s the only way that it’ll ever happen… is unify the belts. Lets see who the real best and bada** man walking this planet.”

Diaz has been at odds with the UFC despite being one of the promotion’s biggest stars. The fighter was sidelined for a long time before returning in 2019 to fight Anthony Pettis and Jorge Masvidal. His most recent match was against Leon Edwards, which he lost by decision.

With one fight remaining on his current contract, Nate Diaz has called out several big names. However, the promotion has not shown interest in making any of his desired matchups happen. Thus, it came as no surprise when Diaz took to Twitter last month to demand his immediate release from the UFC.

AJ McKee recently showed interest in venturing into the world of boxing.

Appearing in an interview with TMZ Sports, the Bellator champion revealed that he would like to test his boxing skills against Floyd Mayweather Jr. and Conor McGregor.

McKee spoke of his willingness to try his hand at the sweet science:

“He [Conor McGregor] got a couple of fights left. Showtime Boxing, lets do it. I’ll box anybody. Like I said, I’m a fighter. I want to test my skills against some of the best and that’s why I’ve called out Floyd [Mayweather Jr.]. I want to test my skills, hand-to-hand combat, with one of the best athletes in hand-to-hand combat.”