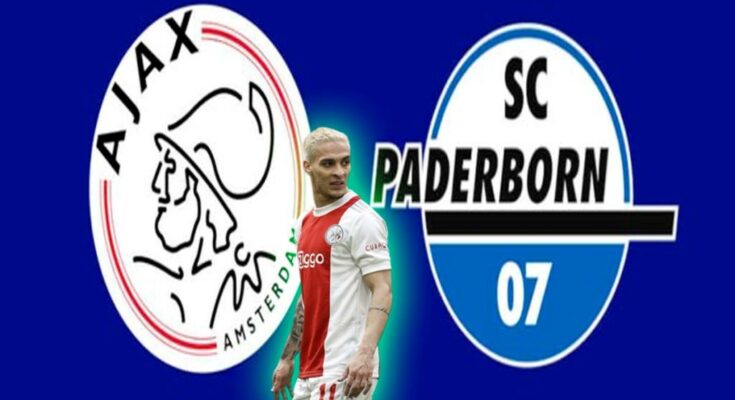 Ajax are set to play Paderborn at the Sportpark Vondersweijde on Saturday for a friendly fixture.

Ajax come into this game on the back of a 3-0 win over Rico Schmitt’s Meppen in their most recent game. A goal from Danish forward Christian Rasmussen and a first-half brace from attacker Sontje Hansen secured the win for Alfred Schreuder’s Ajax.

Paderborn, on the other hand, lost 3-0 to Darmstadt in their most recent official fixture. A goal from midfielder Tim Skarke and a brace from forward Luca Pfeiffer sealed the deal for Darmstadt. Paderborn had attacker Marvin Cuni sent off in the second-half.

Ajax are undergoing a period of transition and change. Erik ten Hag’s departure to Manchester United has been well-documented, and he seems intent on reuniting with a host of Ajax stars as well. Antony, Jurrien Timber, Lisandro Martinez and Nicolas Tagliafico have all been linked with the Old Trafford outfit.

Meanwhile, Ajax academy graduates Ryan Gravenberch and Noussair Mazraoui have both joined Bayern Munich; while star striker Sebastien Haller is closing in on a move to Borussia Dortmund. Ajax have been linked with the likes of AZ Alkmaar’s Owen Wijndal and Tottenham Hotspur’s Steven Bergwijn, but are yet to strengthen their squad.

With PSV Eindhoven signing talents like Walter Benitez and Ki-Jana Hoever, Ajax need to move quickly. Retaining the Eredivisie title will certainly not be an easy task.

Paderborn, on the other hand, finished 7th last season. The 2. Bundesliga side finished the season having won three of their last five league games, and it will be interesting to see how they tackle the upcoming season.

Ajax will be the favourites to win this game.