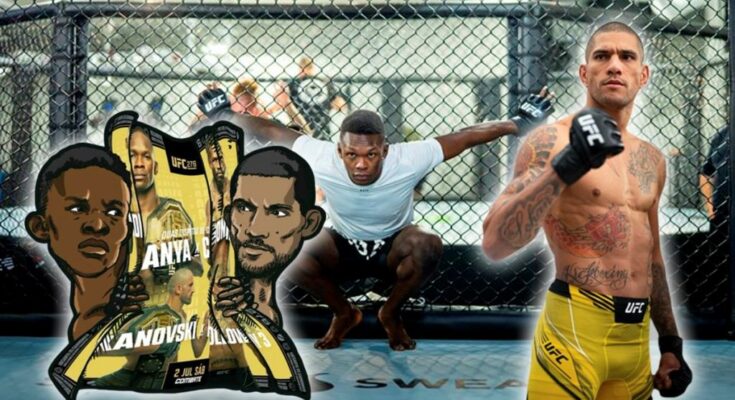 Current UFC middleweight champion Israel Adesanya was taken out on a “stretcher” when he kickboxed Alex Pereira for the second time, the Brazilian said during UFC 276 media day.

The current UFC middleweight champion Israel Adesanya also sent out a warning to Alex Pereira if he was the next man up to face him.

“This TikTok generation has 15-second memory, so they forget,” Adesanya stated. “All they see is the knockout, but they didn’t watch the first fight or even watch the second fight before the finish. This is not kickboxing. This is mixed martial arts, and these ain’t big pillow gloves. These are four-ounce deadly weapons, and I can’t wait to drive that through his face after I go through Jared Cannonier.”

Since leaving kickboxing and debuting for the UFC in 2018, Adesanya is 11-1 with the promotion. Adesanya beat Kelvin Gastelum at UFC 236 in ’19 for the interim UFC middleweight title and beat Robert Whittaker a few months later for the unified belt. He has since defended it against Yoel Romero, Paulo Costa, Marvin Vettori, and Whittaker. The Whittaker rematch was in February.

Pereira, 34, made his MMA debut in 2015. 2-1 to start his career, he took a brief hiatus following the ’16 calendar year. While still kickboxing, Alex Pereira returned to MMA in ’20. Joining the UFC in ’21, Pereira has wins over Andreas Michailidis and Bruno Silva.

A rivalry that transcends MMA might be closer to being booked inside the octagon – that is, if everything goes according to plan at UFC 276.

The two have met twice inside the ring, with Pereira besting Adesanya both times, winning via unanimous decision during their Glory of Heroes 1 match in 2016 and then by third-round KO a year later at Glory of Heroes 7.

Since then, “The Last Stylebender” (22-1 MMA) has gone on to rule the UFC’s middleweight division and he’s set to make his fifth title defense against Jared Cannonier on July 2 at the T-Mobile Arena in Las Vegas.

Alex Pereira signed with the UFC last year as a 3-1 professional mixed martial artist and he’s earned back-to-back finishes inside the Octagon. He’s scheduled to battle No. 4-ranked middleweight Sean Strickland at UFC 276 and should he win, Pereira will likely be knocking on the door of a title shot.

While speaking with the media on Wednesday, Pereira reacted to Adesanya’s recent comments about wanting to “drive” his fists through Pereira’s “face” while wearing four-ounce MMA gloves.

“Well [Adesanya’s comments] actually makes me confused,” Alex Pereira said via MMA Fighting. “Because with those two fights and the knockout, he actually claimed [the gloves] to be a pillow, but now we talk about four-ounce gloves.

“It is a deadly weapon, but if the big pillows already make him leave on the stretcher with an [oxygen] balloon on him, imagine what’s going to happen with four-ounce [gloves].”

Pereira’s comment about Adesanya leaving on a stretcher was an exaggeration as The Last Stylebender was up and walking around after the brutal KO.

Watch Alex Pereira’s win against Israel Adesanya below via the embedded YouTube video:

Adesanya recently said he’s down to defend his belt against Alex Pereira next should he get past Cannonier and the Brazilian beat Strickland. But, Pereira isn’t buying that The Last Stylebender is chomping at the bit to compete against him again.

“I don’t think he wants the fight due to the history that we have,” Pereira said. “If he really wanted the fight, when I first signed with the UFC he wouldn’t let me do three fights like I’m doing now. He would just go to the organization and if he agrees, I want the rubber match right now and I want to get back those losses.

“But after my win in [Madison Square] Garden, he said I still have four more wins before I reach to him. This is the third. But now goes and says that he wants to fight me next and everything that he’s saying because he sees that it’s on the contract so he has nowhere else to run.”