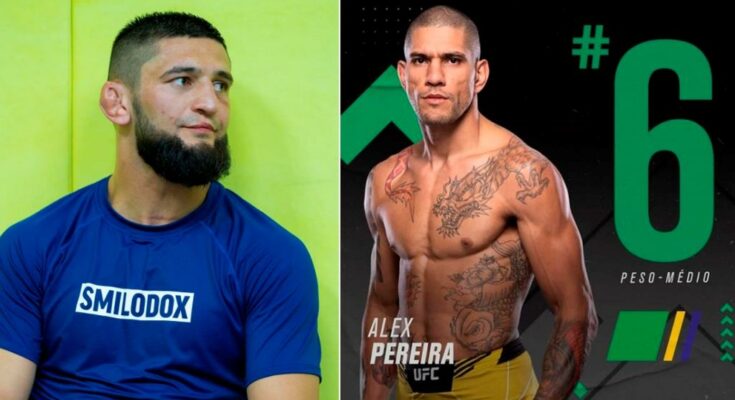 Alex Pereira has won three fights in the UFC, with two via knockout. He is also known for his 2-0 record over current middleweight champion Israel Adesanya in their kickboxing days.

Alex Pereira demolished Sean Strickland at UFC 276 to go 3-0 under the company’s banner in a span of eight months and earn a shot at Israel Adesanya’s middleweight championship. In the aftermath of his victory, however, he became a target for another fast-rising UFC contender.

Khamzat Chimaev has been unbeaten since entering the octagon, with his last fight coming against Gilbert Burns in April. The Swede possesses a flawless 5-0 record in the welterweight division with eyes on a potential title clash in the near future, but that didn’t stop him from voicing his interest in facing “Poatan” next at middleweight, going on Twitter to call company president Dana White to book him against the Brazilian striker next after UFC 276.

Alex Pereira reacted to the callout on the latest edition of MMA Fighting podcast Trocação Franca.

“Look at this guy,” Pereira said of Chimaev’s tweet. “I’m going to fight for the belt, it’s guaranteed. He wants to attention. ‘Oh, I wanna fight this guy.’ He knows I’m the next contender and he still says something like that. I’d like to see [what he would do] if Dana White came out and said, ‘Alex, your shot at Adesanya is guaranteed but he wants some time to prepare, so fight this guy first because he wants to fight you. Your title shot is still guaranteed.’ Let’s see what he would say.

“[Chimaev] wants attention because he knows it doesn’t make sense. I’m going to go back and fight him when I’m already guaranteed for the belt? He wants attention, but he’ll have to take a number and go back to the line.”

The UFC has yet to officially announce a date for Adesanya vs. Pereira, but White said he expects it to be “batsh*t nuts.” Alex Pereira told Trocação Franca he hopes to meet “The Last Stylebender” before the end of the year. As for Chimaev, “Poatan” has no interest facing him before accomplishing his goal in the UFC.

“These guys wanna make a name for themselves [by talking],” Alex Pereira said. “If I wasn’t going to fight for the belt already and he said something like that, hats off to him. But the way he’s doing it, he’s a coward. He’s a coward seeking attention.”