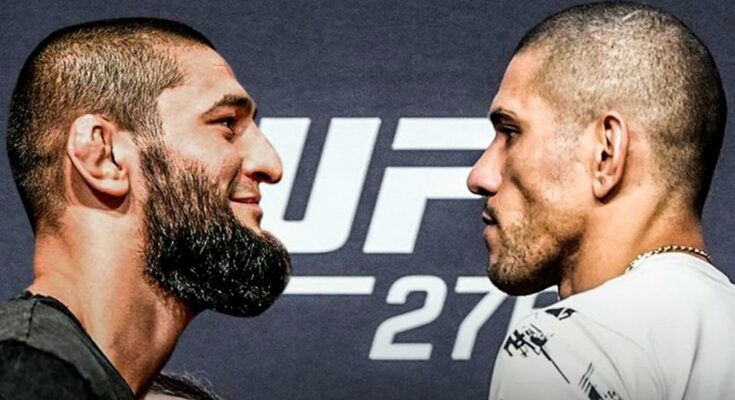 Khamzat appealed to the UFC management in one of the social networks with a request to organize this fight for him.

This past Saturday, Alex Pereira took on Sean Strickland at the T-Mobile Arena in Paradise, NV. The main card bout was expected to be a top contender contest with many backing Pereira to win despite going in as an unranked athlete on the roster.

Alex Pereira responded to the challenge of Khamzat Chimaev

In an interview with Helen Yee, Pereira talked about ‘Borz’ calling him out. Pereira is eyeing a shot at the current UFC Middleweight champion Israel Adesanya after his win and will likely prioritize it.

“Well, I’m going to keep the same line as I do, seeing what is in front of me not what is ahead of me. Same with Sean Strickland’s fight, people talk about Israel’s fight and I say, look, ‘I got this first.’ Right now, I’m going to take care of my fight with Israel for the title and then after that, we’ll see about that.”

Pereira is the only man to have knocked out ‘Stylebender’, a feat he accomplished in a kickboxing match. The pair fought on two occasions with the Brazilian being the victor both times. Fans have been clamoring for UFC president Dana White to set up the fight between the old foes in MMA.

Adesanya handily defeated Jared Cannonier in the main event of the night to add another title defense. The 185-lbs king wasted no time in promoting a potential outing with ‘Poatan’ next using a family-friendly Disney movie reference.