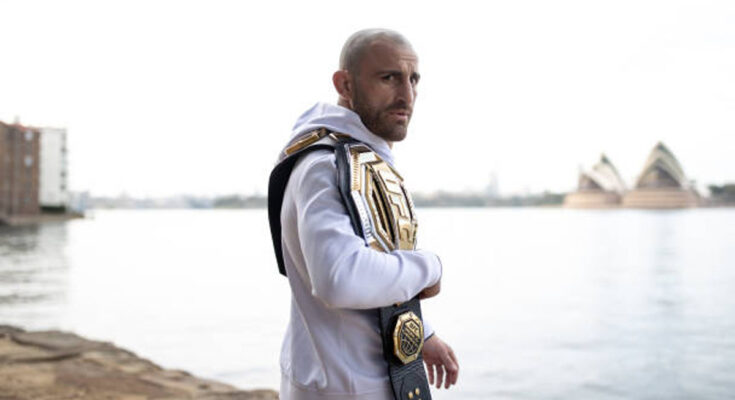 The UFC featherweight champion, Volkanovski (24-1 MMA, 11-0 UFC) will tangle with Holloway (23-6 MMA, 19-6 UFC) for a third time in the July 2 co-main event of UFC 276. Holding two wins over Holloway, a third fight was originally a tough sell for Volkanovski.

Their rematch at UFC 251 was a tightly contested split decision, where many believed Holloway’s hand should’ve been raised. Since then, Volkanovski has defended his title twice in back-to-back dominant performances over Brian Ortega and Chan Sung Jung. He hopes to seal the Holloway trilogy with a standout performance.

Only Conor McGregor, Amanda Nunes, Daniel Cormier and Henry Cejudo have reigned as ‘champ champs’ who’ve dominated in two divisions, and Volkanovski intends to join their ranks after fighting Max Holloway at UFC 276 on Sunday.

The reigning featherweight champ wants to add the lightweight strap to his trophy cabinet, which would put current champion Charles Oliveira firmly in his sights – no small task, considering the Brazilian is on an 11-bout winning streak.

“I want to move up and hold both belts. I want to be champion of both divisions”, the 33-year-old Alex Volkanovski said.

‘Fighters obviously like the idea of being a double champ, but I want to hold both belts and stay active while doing it.’

Moving up and down between weights can be draining for a fighter, so Volkanovski intends to avoid the problem entirely.

‘I won’t put on weight for the move up,’ Alex Volkanovski told News Corp.

‘I’m comfortable where I’m at. I have to cut a little bit for featherweight anyway, so the cut for lightweight just won’t be as big.’

Even if he does beat Holloway for the third time, he could another obstacle to getting a title shot against Oliveira: UFC boss Dana White.

The Aussie admits it can be hard to win White over, but believes he can get the nod if he triumphs over the man who took him right to the wire in a split decision when they last met at UFC 251.

Should he end up with both belts around his waist, he believes a mega-fight with McGregor is a possibility.

Alex Volkanovski was rumoured to be looking at moving straight up to lightweight after he smashed Chan Sung Jung from pillar to post in his TKO win over the Korean at UFC 273 in April.