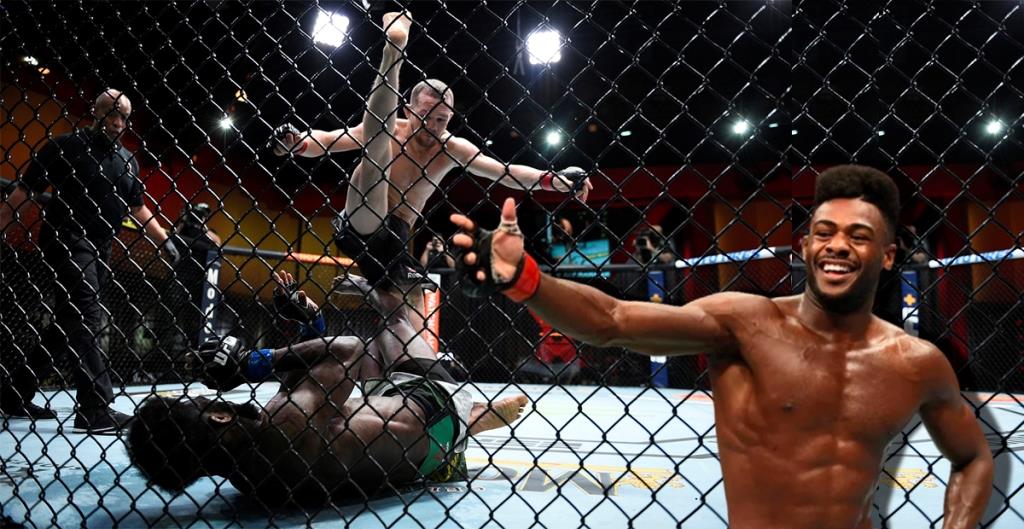 Aljamain Sterling believes he had a better showing during his UFC 259 clash against Petr Yan than many believe.

Sterling and Yan have traded barbs in the lead-up to their rematch at UFC 273. ‘The Funk Master’ has even accused the interim bantamweight champion of taking PEDs.

When Yan posted a tweet of him being randomly tested by USADA, Sterling replied:

A fan then chimed in and said the current bantamweight champion was being soundly beaten before Yan landed an illegal knee which lead to the Russian being disqualified. Sterling dismissed the fan’s take and claimed he won every exchange against ‘No Mercy’ :

“I won every exchange. You clearly didn’t watch the fight.”

Aljamain Sterling and Petr Yan had their first fight at UFC 259. ‘No Mercy’ was leading on two judges’ scorecards and was seemingly on course to retain the 135-lbs crown when he landed an illegal knee, rendering Sterling unable to continue. Yan was subsequently disqualified and ‘The Funkmaster’ became the first fighter in UFC history to win a title via disqualification.

During a recent interview with ESPN MMA, T.J. Dillashaw was asked for his thoughts on the upcoming rematch between Aljamain Sterling and Petr Yan at UFC 273. The two-time bantamweight champion took the opportunity to praise ‘No Mercy’ and tipped Yan to beat Sterling.

Dillashaw called Yan “the full package” and claimed that ‘The Funk Master’ didn’t have “the fighting spirit in him.”

“Yan is a killer, he stays real tight, he stays clean, he’s got the mentality, he’s a fighter. You got those competitors, you got athletes and then you got fighters. Guys like myself and guys like Yan are the full package, you do all of them. I feel like Sterling is more like a competitor or athlete, he doesn’t have that fighting spirit in him. He’s a little bit weak when it comes to that,” said Dillashaw.

“Has anyone tested his nips yet? They look like they still may be up to no good,” wrote Sterling.

After his win over Corey Sandhagen, T.J. Dillashaw put himself in position to challenge the winner of the rematch between Petr Yan and Aljamain Sterling. However, he was out for an extended period of time due to an injury and might need to fight Jose Aldo before he can get a crack at the bantamweight title.