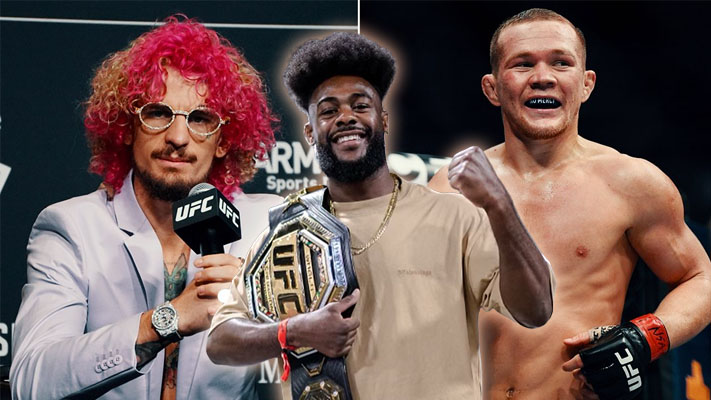 Ahead of UFC 280, Aljamain Sterling has analyzed the bantamweight division and detailed why Petr Yan may have a hard time against Sean O’Malley when the two collide in a three-round affair next month.

‘Funk Master’ has been locked inside the octagon with the dangerous Russian on two separate occasions and believes he knows what weaknesses the 135lber has.

Although the first of their meetings ended controversially, the bantamweight champion silenced the doubters by earning a decision win in the second bout.

Breaking down the best fighters in his division, Aljamain Sterling insisted that Petr Yan struggles with opponents who snipe from the outside with strikes and use their range and footwork well. These are abilities which the Dagestani’s next opponent Sean O’Malley possesses.

“He’s got some serious skills, he’s talented. Sugar t*ts [O’Malley] is more of a hammer, we haven’t seen him as a nail yet. When someone actually gives him back a little push back, we’ll see how he’s able to handle some adversity…We’ll see how he does with a guy like Petr Yan… I think Petr Yan is the real deal… I think he’s a smart, intellectual fighter. He’s dangerous, but I think he struggles with guys who have really good footwork and can avoid his shots and have a little bit of a rangier reach on them.”

Following the title eliminator clash between O’Malley and Yan at UFC 280, Aljamain Sterling will step into the octagon to defend his 135lbs throne when he locks horns with a determined T.J. Dillashaw in the co-headliner on the night.

Check out what ‘Aljo’ had to say about the top names in his division in the video below:

Should the winner of Sean O’Malley vs. Petr Yan be the number one contender?

Despite competing against a stacked bantamweight division, both Petr Yan and Sean O’Malley are hoping to be rewarded with a title shot should they put on an impressive performance on October 22.

Following Cory Sandhagen’s solid showing against Song Yadong earlier this month, he decided to call for a fight against Chito Vera and Merab Dvalishvili. These two competitors are also in the running to be next in line for a shot at UFC gold.

One major problem for each top contender at bantamweight is the fact that Aljamain Sterling could lose his title next month. This would likely give him rights to an instant rematch, halting the plans of everyone else at 135lbs.