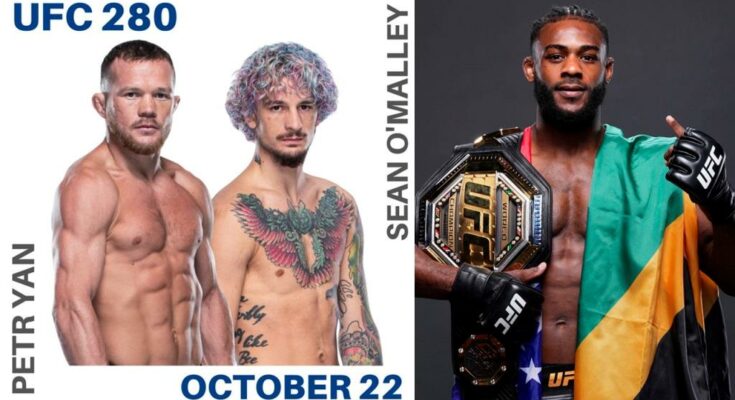 UFC bantamweight titleholder Aljamain Sterling cheered on his division’s prospect Sean O’Malley, who is scheduled to fight Petr Yan, but predicted his loss after a illegal punch.

O’Malley announced the match-up during his chat with Ryan Clark on ESPN MMA. The No.13-ranked bantamweight contender also added that he is better than Yan in fighting and will prove that come fight night.

While a knockout win against ‘No Mercy’ would be massive, ‘Sugar’ will be content to just get the result in his favor. Here’s what O’Malley stated in his chat on ESPN MMA:

Sterling took note of O’Malley’s words in the Instagram clip and commented that ‘Sugar’ should believe in himself. He then jokingly added that Yan will win by landing an illegal knee, which is a jibe at the Russian’s disqualification during their fight at UFC 259. Here’s what ‘Funk Master’ wrote:

“You have to believe this about yourself. If you don’t, then what are you even doing it for? So its Yan by 2nd RD illegal knee for me”

Aljamain Sterling is set for his second title defense at UFC 280 as he takes on former bantamweight champion TJ Dillashaw.

The 135lbs title fight will occupy the co-main event slot for the pay-per-view in Abu Dhabi.

Aljamain Sterling is coming off a split-decision win against Petr Yan in his last fight at UFC 273. Dillashaw, meanwhile, successfully returned to action against Cory Sandhagen in July 2021 after a two-year-long octagon hiatus.

Dillashaw didn’t lose his 135lbs title in a fight as he was stripped after being caught for PED use. He will get a chance to reclaim the throne against ‘Funk Master’ in October.