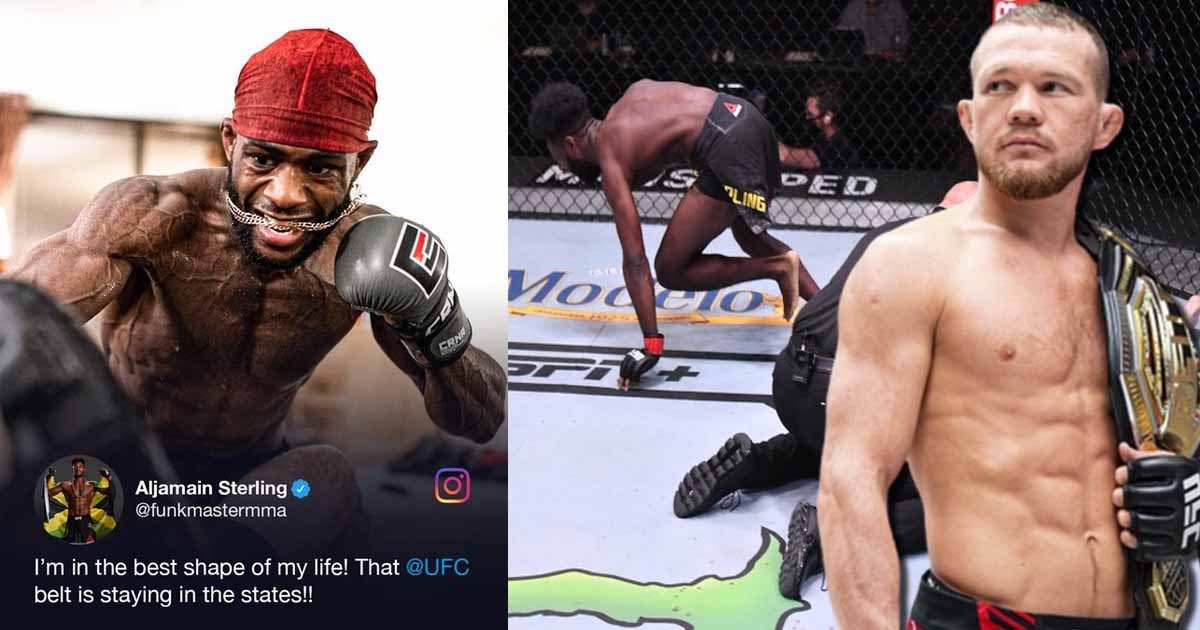 13 months in the making, Aljamain Sterling is ready to leave no stone unturned on Saturday night as he anticipates a finish in his rematch against Petr Yan in what will be his first attempt at a title defense.

Sterling spoke with Daniel Cormier in an interview titled The DC Check-In with Aljamain Sterling and mentioned that since his neck surgery, he hasn’t been forced to take any days off. When asked if anything has changed for this camp, Sterling said:

“My game plan is never gonna change for anybody, I’m looking to take you down drag you to deep waters and submit you. Thats the game plan coming into this one and hopefully I can get the TKO, pounding him out will be great.”

The first matchup between the two ended when a downed Sterling was hammered with an illegal knee thrown by Yan in the latter stages of the fight. The contest was ruled a disqualification and Yan was forced to hand over the UFC bantamweight belt after Sterling was deemed unfit to continue. It remains the only time in promotional history that the belt has changed hands because of a DQ.

The UFC originally scheduled a rematch back in October of 2021 before it became apparent the timeline for Sterling was too aggressive. Five weeks removed from a razor thin split decision loss to TJ Dillashaw stepped in Cory Sandhagen. The number three ranked bantamweight showed up to compete but struggled later on, not unlike any other opponent Yan has faced up to this point.

It’s no secret Sterling has taken a truckload of unwarranted abuse from pundits, journalists, fighters, and fans since the incident occurred. He shared his feelings after Cormier asked if there was any mallace towards his opponent.

“I’m just kind of over this chapter in my life. Its been a long 13 months having to hear his fans and even Americans talking s**t… he’s great, but I am the best and that’s what I am going to prove on Saturday night.”

The wait is finally over as the two bantamweights are set to meet each other in the co-main event at UFC 273 this weekend in Jacksonville, Florida at the Vystar Veterans Memorial Arena.

“It’s not gonna change the way I approach the fight.” – Aljamain Sterling on what he learned during his first encounter with Petr Yan

Aljamain Sterling feels the success he found early in the first round verse Yan is the key to getting the job done at UFC 273 in Florida this weekend. Speaking to Daniel Cormier, Sterling said:

“I can do that for five rounds, I’ve done it in the room with three different training partners in a single sparring session.”

Sterling went on to say that since the UFC tried to rebook the bout in October, he has felt much more successful during his training now than he even did then. Sterling dealt with the lingering pain for the majority of his career and felt a disc-replacement would be the ideal way to move forward.

Claiming his injury and weight cut as the reason he was unable to fight the first time around, Sterling is desperate to prove that Saturday night will be different.