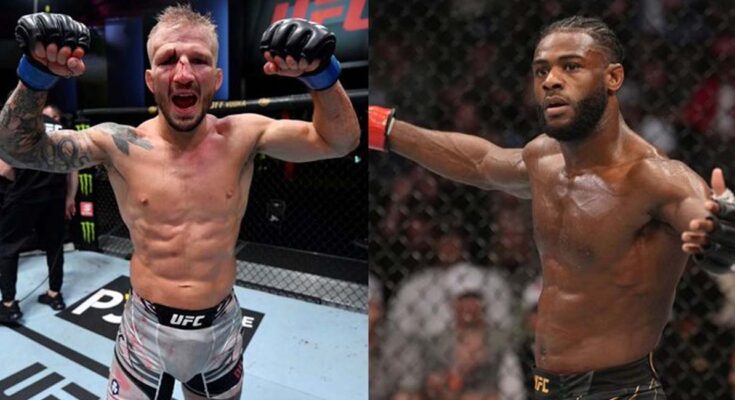 Aljamain Sterling (21-3 MMA, 13-3 UFC), who retained his title against Petr Yan this past Saturday at UFC 273, has a couple of fighters in mind for his next title defense. UFC president Dana White said Dillashaw (17-4 MMA, 13-4 UFC) is likely next for Sterling, but the champion is also considering Jose Aldo and the returning Henry Cejudo.

“I feel like the easiest fight out of all three is T.J. Dillashaw if I’m being 100 percent honest,” Aljamain Sterling said on his Instagram.

“I don’t want to say easy, like disrespectfully. Like easy, like in terms of my style vs. his, I think I would have more success against him than the other two, but that’s just my personal opinion.

“He keeps telling me I’m easy money. I don’t see how. Like, you had a stand-up war that you lost to Cory Sandhagen. You took him down and did absolutely zero. They said I did nothing with my takedowns? This guy did absolutely zero with those takedowns. He got knocked out by Henry Cejudo then got suspended.”

Dillashaw initially picked Yan to beat Sterling in the rematch but did say that Sterling’s key to victory would be his grappling. Sterling ended up finding big success on the ground, controlling Yan in Rounds 2 and 3 to earn the split decision.

“Aljamain definitely has to out-grapple him to get the fight done,” Dillashaw told MMA Junkie.

“I mean, to be honest, he would probably have to submit him. I don’t think he’s going to be able to keep that pace up to keep him down, and his striking is just not dangerous enough to make Yan believe in it. So, I think Yan just has to stick to the same game plan he did last time. Be patient, make sure to defend the takedowns, and kind of dominate him.”