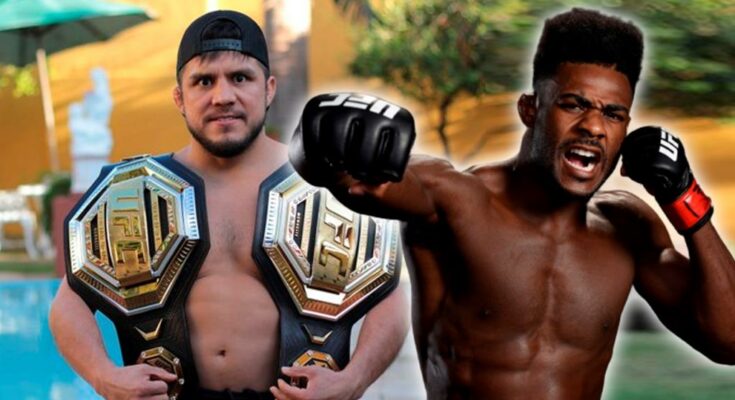 Henry Cejudo was involved in a back-and-forth verbal exchange with Sean O’Malley this past weekend. O’Malley’s fight against Pedro Munhoz ended in a no-contest due to an accidental eye poke. While ‘Sugar’ O’Malley was talking to BT Sport, Henry ‘Triple C’ Cejudo challenged the No.13-ranked bantamweight to a fight.

Aljamain ‘Funk Master’ Sterling kept a close eye on Cejudo’s antics as he wrote on Instagram:

“Whenever you get serious and want to step up to the challenge I’ll gladly spank dat 🍑 Mr. Cedoodoo. Until then keep eating and crashing press conferences, as that’s the closest you’ll ever get to the octagon again!”
Sterling added that he doesn’t have any beef with Henry Cejudo. However, the bantamweight titleholder is keen to show that his D3 wrestling is better than that of the Olympic gold medalist:

“There’s no “beef” over here with Henry. But as a competitor, I’ll show him the levels of D3 wrestling!”

Henry Cejudo announced his retirement from MMA after his UFC 249 win against Dominick Cruz. He won both the flyweight and bantamweight championships in the UFC. ‘The Messenger’ is contemplating a comeback to the octagon, and Sterling is high up on the list of potential opponents for his return.

Aljamain Sterling vs. Henry Cejudo – Will it happen?

Aljamain Sterling defended his title for the first time in his last fight at UFC 273 against Petr Yan. While a clash against Cejudo is a possibility, it looks like ‘Funk Master’ might face yet another former champion T.J. Dillashaw next at UFC 279.

Dillashaw made a successful return to the octagon last year against Cory Sandhagen. He wants to fight for the belt that he never lost.

Cejudo, meanwhile, has been inactive for over two years now. It might make sense for the former two-division champion to take a tune-up fight before going into a championship bout.

‘Triple C’ has also shown interest in sharing the octagon with Alexander Volkanovski. The UFC featherweight champion will need a fresh challenge after defeating Max Holloway for the third time at UFC 276.