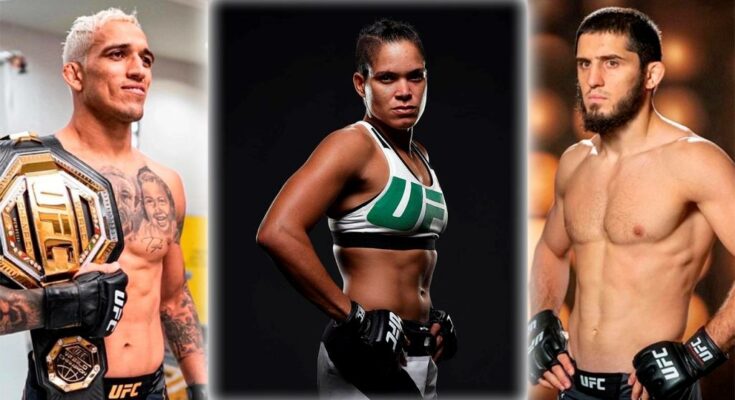 Charles Oliveira and Islam Makhachev will fight for the vacant lightweight title on October 22 at UFC 280 in Abu Dhabi.

Currently, Amanda Nunes is attempting to bounce back from the first loss of her UFC run since 2014. She was submitted by Julianna Pena at UFC 269 in December, dropping the women’s bantamweight title.

Amanda Nunes’ loss to Julianna Pena is widely regarded as the biggest upset in MMA history, topping the likes of GSP vs. Matt Serra and Tim Sylvia vs. Randy Couture.

The fight snapped Nunes’ 12-fight win streak since losing to Can Zingano in 2014. Now, Nunes gets the chance to avenge that loss and regain the 135-pound crown when she meets Pena at UFC 277 on July 30 in the main event.

In an interview with Nikhil Sharma, when asked about who Amanda Nunes sees coming out on top of the upcoming contest between Charles Oliveira and Islam Makhachev, Nunes backed her fellow Brazilian.

“If this fight goes to the floor or stays on the feet, I feel like Charles will have a lot more to offer, especially in striking, muay Thai, I feel he has a lot more. I don’t see the holes that his opponent can finish him. But a fight’s a fight. We always stay with our fingers crossed but I’m going for Charles “do Bronx.”

For the second time in the same calendar month, the UFC will promote a pay-per-view on Saturday, this time with a pair of title rematches atop the marquee from the American Airlines Center in Dallas.

Julianna Pena will make the first defense of her women’s bantamweight title in the main event of UFC 277 as she faces fellow TUF coach Amanda Nunes in a rematch of Pena’s massive upset in December. In the co-main event, former champion Brandon Moreno welcomes Kai Kara-France for the second time, although this rematch will be contested for the interim bantamweight title while Deiveson Figueiredo recovers from injury.

Although it wouldn’t be fair to call UFC 277 a deep PPV card, the featured bouts still offer an intriguing mixture of storylines to follow entering this weekend.