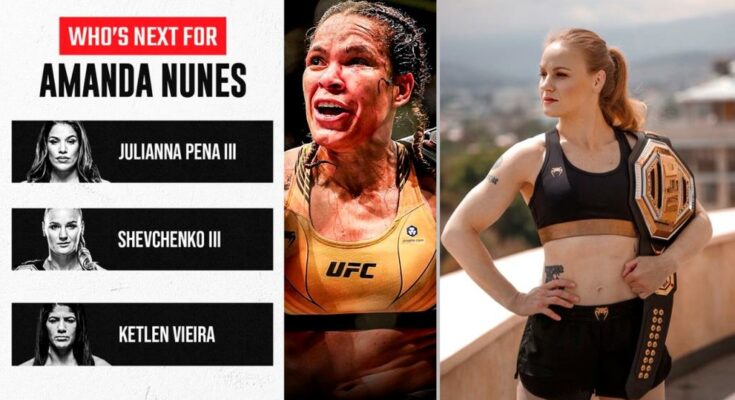 Amanda Nunes (22-5 MMA, 15-2 UFC) avenged her stunning upset loss to Julianna Pena (11-5 MMA, 7-3 UFC) on Saturday July 31 at American Airlines Center in Dallas with a lopsided beatdown over the course of five rounds that resulted in a unanimous decision win to regain the women’s bantamweight title.

The UFC champion in two divisions, Amanda Nunes, said she was ready to hold a third fight with the holder of the title in the Flyweight division , Valentina Shevchenko.

Reassuming her throne opens up all the options for “The Lioness” going forward, and she said afterward she’s not sure what’s next.

Shevchenko’s name was broached to Nunes in a follow-up question, and she was immediately warm to it. The pair have fought twice before, with Nunes winning a non-title bout at UFC 196 in March 2016, then a 135-pound title fight at UFC 215 in September 2017 – both on the scorecards.

Since then, Shevchenko has moved down to women’s flyweight and racked up seven title defenses. The idea of a third has always dangled as a possibility, and even White seemed open to it when asked after UFC 277.

Well, Amanda Nunes is, too.

In the immediate aftermath of Nunes’ win, Shevchenko took to social media and accused her rival of “copying” some of her striking techniques in the win over Pena.

Nunes found that comment comical, and reminded Shevchenko of how close she was to being dethroned in a split decision win over Taila Santos at UFC 275 in June.

“Valentina, she lost her last fight,” Nunes said. “I think if Taila don’t get that head butt, that fight could be way different.”