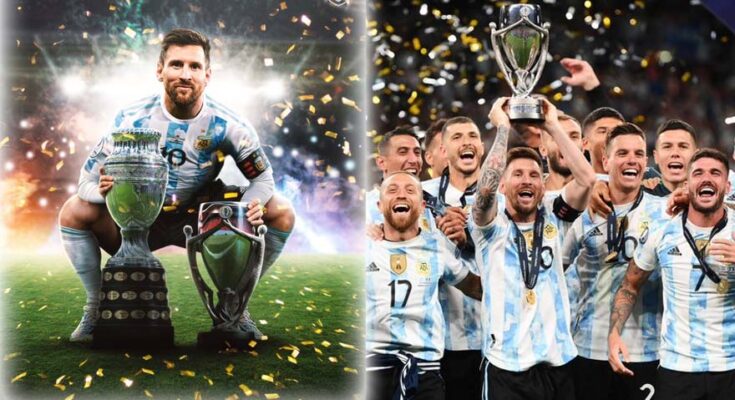 Dubbed the Grand Final between the winners of the Copa America and the European Championship, the South Americans were triumphant in a one-sided affair, whilst also extending their unbeaten run to 32.

Hoping to extend their formidable unbeaten tenure across all competitions to 32 matches, a more galvanised Argentina side dominated the opening attacking proceedings on their first appearance at Wembley Stadium since March 2001.

Returning to the scene of their European Championship penalty shoot-out victory over England, Italy had their first shot on target as Giacomo Raspadori’s low drive was amply held by Emiliano Martínez.

As Giorgio Chiellini prepared to bring down the curtain on his illustrious career for the ‘Azzurri’, Italy began to find their rhythm in the footballing heavyweight clash.

However, Argentina were ahead in the 28th minute when in his first-ever appearance against Italy, Lionel Messi produced yet another mesmerising run into the penalty area to put it on a plate for strike-partner Lautaro Martínez to slot into an empty net.

‘La Albiceleste’ then doubled their advantage in the first minute of first-half stoppage-time, when goalscorer Martínez turned provider, manufacturing a defence-splitting pass that allowed Ángel Di María to exquisitely lift the ball over the advancing Gianluigi Donnarumma.

Argentina were inches away from taking an unassailable lead in the contest when Donnarumma did exceedingly well to clear Leonardo Bonucci’s overzealous back pass off the line. In spite of a hat-trick of substitutions at HT, Italy continued to contain a rampant ‘La Albiceleste’ attack, as Giovani Lo Celso failed to provide a third Argentina goal with an open net at his mercy.

Substitute Paulo Dybala added the concluding touches to Argentina’s one-sided victory, after only being on the field a matter of minutes, clinically slotting into the bottom right-hand corner, as ‘La Albiceleste’ extended their deep-rooted bragging rights over Italy.

Meanwhile, the ‘Azzurri’ will now turn their attentions to winning their first UEFA Nations League trophy, starting against Germany on Saturday.