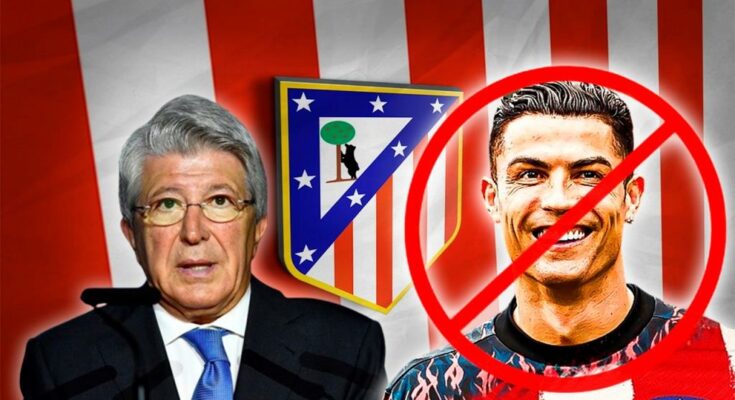 In an interview with El Partidazo de COPE, the Atletico president made it clear that a transfer for the 37-year-old to the Wanda Metropolitano Stadium wasn’t possible.

He is quoted as saying (via Fabrizio Romano):

“I don’t know who invented this story about Cristiano Ronaldo to Atletico Madrid. It’s definitely not true. It’s practically impossible for him to come to Atletico de Madrid.”

Ronaldo’s future continues to be a hot topic of debate, with the Portuguese star reportedly holding talks with Manchester United club officials on July 26 about his future.

Those talks are said to have reached an impasse, with Manchester United still not willing to sell their star man (as per Telegraph).

Ronaldo rejoined the Red Devils from Juventus last summer for £13.5 million and had a fine season at Old Trafford, bagging 24 goals in 38 games.

However, his United side didn’t live up to expectations, finishing sixth in the Premier League and trophyless.

Their sixth-placed finish means Ronaldo will have to play in the Europa League rather than the Champions League.

This has seemingly brought about his desire to leave alongside a supposed lack of ambition shown by the thirteen-time Premier League winners.

Potential suitors have included the likes of Chelsea, Bayern Munich and Paris Saint-Germain.

None of the three have made their interest concrete and it had appeared that Atletico were the side most likely to make a move.

Reports suggested that Diego Simeone’s side would be willing to sanction a deal for the Portuguese star if he drops his £360,000 a-week wages.

The former Juventus striker has a year left on his deal with United and despite desiring an Old Trafford exit, he looks increasingly likely to stay.

Atletico Madrid seemed like the last potential suitor for Cristiano Ronaldo in terms of a side that fit all the necessary demands of the Portuguese star.

A top UEFA Champions League contender, a renowned manager in Diego Simeone and the opportunity to be made the team’s star man.

That idea has now been diminished by Atletico’s president’s comments on the speculation and Ronaldo’s chances of leaving United are diminishing.

There will be a ton of uncertainty over the 37-year-old if he does stay at Manchester United this season.

It’s hard to envision the five-time Ballon d’Or winner holding a good bond with teammates as he wants out of the club.