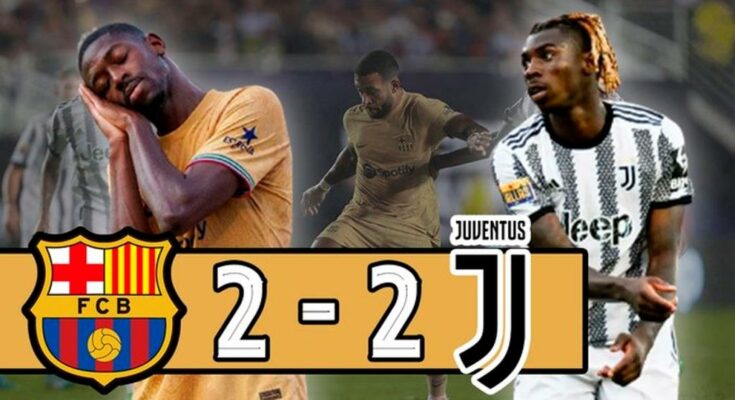 Barcelona were held to a 2-2 draw by Juventus in the third pre-season friendly encounter of their ongoing US tour.

Barcelona and Juventus put on a show for a large crowd in Dallas in an entertaining 2-2 draw that saw Ousmane Dembele and Moise Kean both strike two goals each for their respective sides.

Dembele got the start and torched the Juventus backline on two plays which saw him dribble past players like they weren’t there. He finished one move off with his left foot and another with his right for two moments of magic that Barcelona fans won’t soon forget.

Moise Keane responded for Juventus after the Italian side each time the Bianconeri were down. First he converted a pinpoint cross into the six-yard box by Juan Cuadrado, and then he finished off a strong move down the heart of the Barcelona defense, through the legs of the Barca ‘keeper.

Robert Lewandowski started again for Barcelona, but he could not find the back of the net for the second straight match. Star forward Dusan Vlahovic was kept out of the match for Juventus and American international Weston McKennie did not make an appearance in front of his hometown crowd.

Barcelona face the New York Red Bulls next, while Juventus meets Real Madrid. Both teams will then play one final exhibition back in Europe before kicking off their respective domestic seasons.

Lewandowski who? Ousmane Dembele outshined the club’s star signing, and he showed why Barcelona were so intent on locking him up to a new contract despite a down season in 2021/22 amid widespread interest in his services after the expiration of his contract this summer.

Dembele proved once again that he can singlehandedly decide a match with his speed and silky dribbling moves, because they can be so effective at breaking down opposing backlines and generally wreaking chaos.

When he goes 1-v-1 against opposing defenders, Dembele makes things happen, and those kind of players are hard to come by in elite level football. The fact that Barcelona have two of them — Raphinha’s magic decided the match against Real Madrid, and he returned to rattle the post against Juve — should alone guarantee more on-field success for Barcelona this season.

How did Lewandowski do against Juventus?

The Polish international didn’t score in his second match for the club, but he was working hard as the leader of the front line, occupying the other team’s center-backs, including the imposing Bremer, who was making his first start for Juventus. Lewa was limited to one decent chance in his hour on the field.

But it would be unrealistic to expect much more than this, even from a player brought in to make an instant impact. As a forward who depends on service, synchronized movements and chemistry with his teammates will be key, and that can only develop over time.

Xavi has had to field questions about whether he’s trying to send Frenkie de Jong a message by playing the midfielder … at center-back during preseason. The Barcelona manager has denied it amid speculation regarding Barcelona’s apparent need to transfer him this summer in order to balance its books. There is other chatter that the player is refusing to leave because he’s owed money by the club, while still other reports say he wants to remain at Barcelona though it could mean a cut in wages.

With all that swirling around, De Jong played at center-back again against Juventus. Although he’s played the position in the past at Ajax, he wasn’t brought to Barcelona to be a center back. De Jong has still acquitted himself well, and if Xavi’s words are taken at face value, then he may very well best serve the team in the back since the options are not as plentiful as they are in midfield, where it’s a veritable logjam.