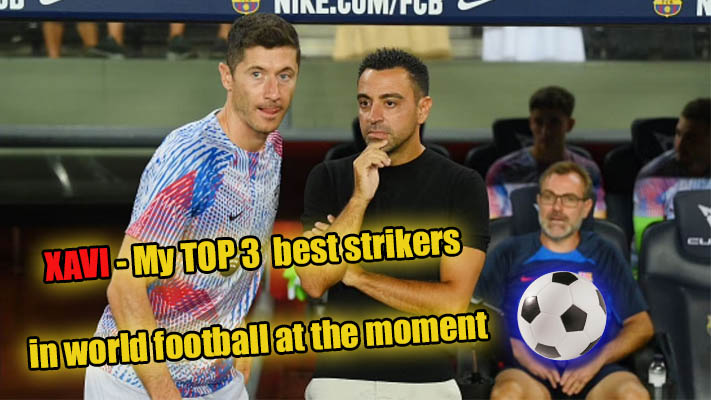 Barca signed Lewandowski from Bayern Munich this summer for a fee of €50 million. The 34-year-old has since shown that age is just a number and has scored eight goals in five games across all competitions for his new team.

The Polish forward’s latest exploits came in the form of a treble in a UEFA Champions League group stage game against Czech Republic side Viktoria Plzen. The Poland international scored three of Barcelona’s five goals in a dominant 5-1 win on Wednesday (September 7).

Speaking after the full-time whistle at Camp Nou, Xavi declared Lewandowski one of the three best strikers in the world because of what he offers besides just scoring goals. He said (h/t Mirror):

“Apart from the goals, he makes the team play, he understands when to press, he gives us many solutions in attack, how he communicates, he understands the game. The best? There’s him, Benzema and also Haaland.”

Benzema and Haaland’s inclusion in Xavi’s list is not without merit. The Real Madrid striker is one of the favorites to win the Ballon d’Or this year and scored 44 goals in 45 games across competitions last season.

Haaland, on the other hand, has continued his prolific goal-scoring form since joining Manchester City from Borussia Dortmund this summer. He has netted 12 goals and provided one assist in just eight games this season.

Barcelona have enjoyed an unbeaten start to the season so far, boosted by the acquisition of Robert Lewandowski. The Blaugrana have 10 points from four La Liga games after winning all three games following their opening day 0-0 draw against Rayo Vallecano.

The Catalan giants started off their Champions League journey this season with a dominant 5-1 win against Viktoria Plzen at home. Lewandowski has played in all five of Barcelona’s games so far and has scored in four of those matches.

The Polish forward scored twice against Real Sociedad in a 4-1 win on August 22, followed by another brace against Real Valladolid in a 4-0 victory six days later. His latest league goal came in a 3-0 thrashing of Sevilla on Sunday (September 4),

A hat-trick against Plzen took Lewandowski’s tally to eight for the season in all competitions. The Polish striker has showcased why Xavi paid €50 million for him despite signing Pierre-Emerick Aubameyang and Memphis Depay last season.