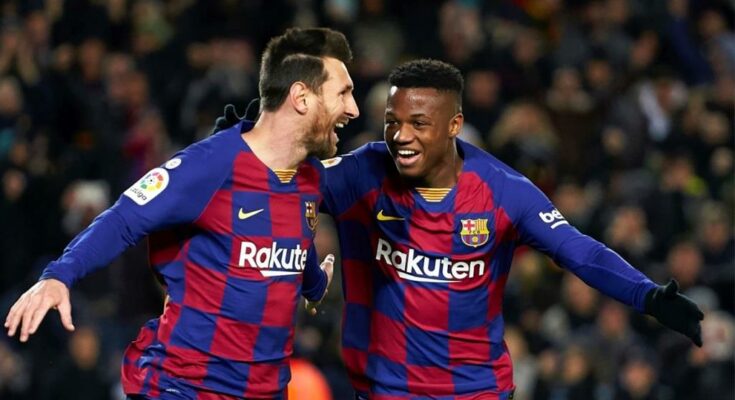 Barcelona winger Ansu Fati has declared he wants Paris Saint-Germain forward Lionel Messi to return to Camp Nou. He stated that the Argentine ‘deserves’ more following his departure from the club last summer.

The Argentine icon joined PSG as the Blaugrana could not afford to offer him a new deal due to their infamously fragile financial situation.

Messi will arguably go down as Barcelona’s greatest ever player after scoring 672 times in 778 appearances. He also claimed 10 La Liga titles as well as three Champions League triumphs with the Spanish side.

The 35-year-old endured a difficult debut campaign in Paris, scoring just 11 goals in 34 matches in all competitions. His former teammate Fati has pleaded with the club to bring Messi back in order to give him a better send-off.

“Messi? Yes I would like him back. He deserves a better end in Barcelona, he is the best player in history.”

Messi’s tally of six Ligue 1 goals was the first time since the 2005-06 season that he has failed to hit double digits. The legendary playmaker was even booed by PSG supporters following their humiliating defeat in the Champions League second round against Real Madrid.

According to the already referenced 90min article, Blaugrana president Joan Laporta recently made similar comments to Fati when asked about Messi. He proclaimed:

“Messi has been everything, for Barça he has possibly been the best player in history, the most efficient, only comparable to Johan Cruyff in the history of Barca. But it had to happen one day, we had to make a decision as a consequence of the legacy [financial trouble] we had received [from predecessor Josep Maria Bartomeu].”

Laporta admitted that the seven-time Ballon d’Or winner could return to the Catalans in the future. He said:

“The institution is above players and coaches, but I think, I wish, that the Messi chapter is not over yet at Barca and I think our responsibility is to ensure that this open chapter, which has not yet been closed, has a good moment in which it can be done as it should have been done and, in addition, has a much more splendid ending than it had.”

“As the president of Barca, I think I did what I had to do. But on a personal level and also as president, I think I owe him.”