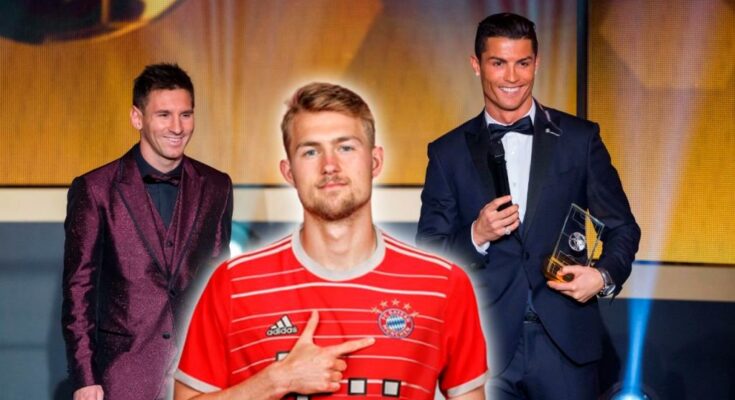 New Bayern Munich defender Matthijs de Ligt has picked his former Juventus teammate Cristiano Ronaldo over Lionel Messi. The 22-year-old defender recently moved to the Bundesliga champions for a fee of around €80 million.

Being his former teammate was the primary reason why the Dutch defender favored the 37-year-old forward. De Ligt appreciated both superstars when asked to choose one of them.

However, due to his allegiance with Juventus, he picked Ronaldo over Messi. Speaking to ESPN NL, Matthijs de Ligt said the following:

“Difficult one, both amazing players, best of the generation. I’ve played with Cristiano (Ronaldo) so I would say, to me it would be Cristiano.”

It is worth mentioning that being an ex-teammate to either Cristiano Ronaldo or Lionel Messi does not mean the player would choose the one they have played with.

Former Manchester United forward Dimitar Berbatov’s old comments resurfaced online recently where he picked Messi over Ronaldo. This was despite the former Bulgarian forward playing alongside Ronaldo at Manchester United during the Portuguese forward’s first stint at Old Trafford.

Both Cristiano Ronaldo and Lionel Messi are coming towards the end of their illustrious careers. The duo will be competing in the 2022 FIFA World Cup in Qatar knowing that it could very well be the last time they play in international football’s most prestigious tournament. It is worth mentioning that both Messi and Ronaldo will be captaining their respective countries at the tournament in Qatar.

Neither Lionel Messi nor Cristiano Ronaldo have lifted the World Cup in their careers. Messi has come the closest to winning the tournament. His Argentina side suffered a 1-0 defeat at the hands of Germany in the 2014 FIFA World Cup final in Brazil.

Could Lionel Messi or Cristiano Ronaldo play in the United States?

Former Everton and LA Galaxy forward Landon Donovan believes Lionel Messi and Cristiano Ronaldo could play in the MLS in the near future.

The former American international was quoted as saying the following (via MARCA):

“Beckham led the way: now our league is growing very fast and everyone wants to come here. I think one day Messi and Cristiano will play here too.”

Messi has been linked with a move to David Beckham-owned Inter Miami. The seven-time Ballon d’Or winner, however, still has one more year remaining on his current contract with Paris Saint-Germain (PSG).