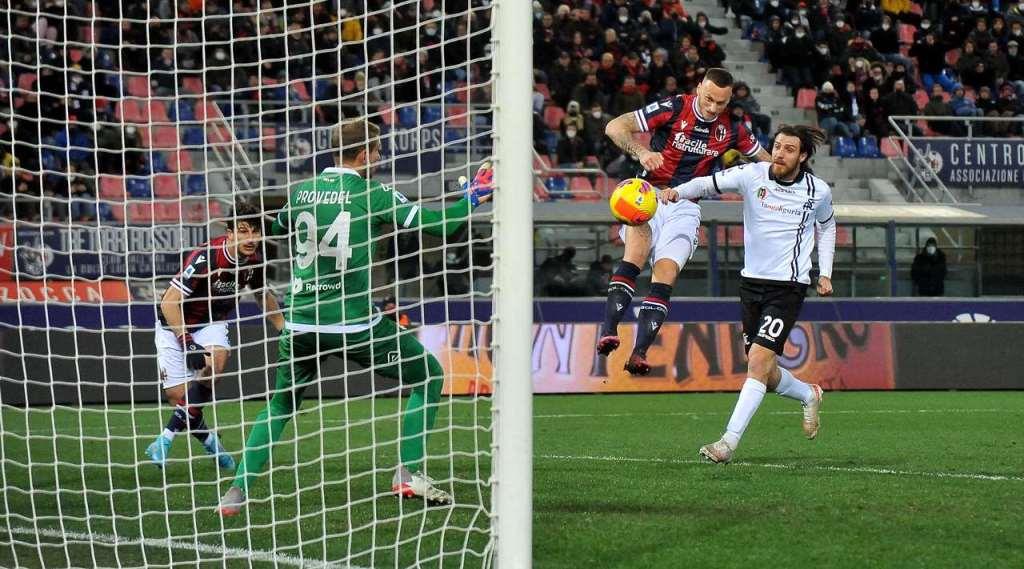 Bologna F.C. 1909 left it late to overcome Spezia Calcio 2-1 at the Stadio Renato Dall’Ara in Serie A (SA). This result sees Bologna claim victory after a troublesome five-game winless run.

The ‘Red and Blues came into this fixture having picked up only one win in nine league games. In contrast, Thiago Motta – SA’s Manager of the Month for January – had led his side to three wins in their previous five outings, and it was the visitors who gave Bologna an early scare when Daniele Verde struck from the edge of the area, forcing Łukasz Skorupski into an important save.

However, moments later, Marko Arnautović unleashed a wicked strike at the other end that was ultimately denied by the crossbar.

Spezia mounted the most pressure, though, and took the lead in the 11th minute through Rey Manaj, headed a glorious cross from Arkadiusz Reca past Skorupski for his third goal of the season.

No other Bologna side since the 1955/56 campaign has conceded as many goals after 25 SA games as the 41 this current outfit has shipped, and a home defeat to one of the teams below them in the table would have done little to help them avoid getting pulled into a relegation battle.

Fortunately for the seven-time Serie A winners, they responded well and equalised just before the break, when Arnautović slotted home after collecting an instinctive killer pass from Musa Barrow.

After HT, Bologna picked up where they left off, dominating possession as they attempted to create a dangerous opening. They did find a window of opportunity in the 55th minute, when Barrow found himself in a good shooting position, but Ivan Provedel denied his effort.

The game was finely poised at the midway point of the second half, but chances were few and far between as Motta’s men remained tightly compact as they attempted to frustrate the hosts, who were desperately pushing for three points.

In the end, Arnautović became Bologna’s hero late on, guiding in a header following a swinging cross from Nicola Sansone to clinch the three points for his side.

The win for Siniša Mihajlović and Co means they are now nine points clear of the relegation zone. Meanwhile, Spezia’s four-game unbeaten run away from home came to an end, and they will continue to look over their shoulder as we approach the business end of the season.