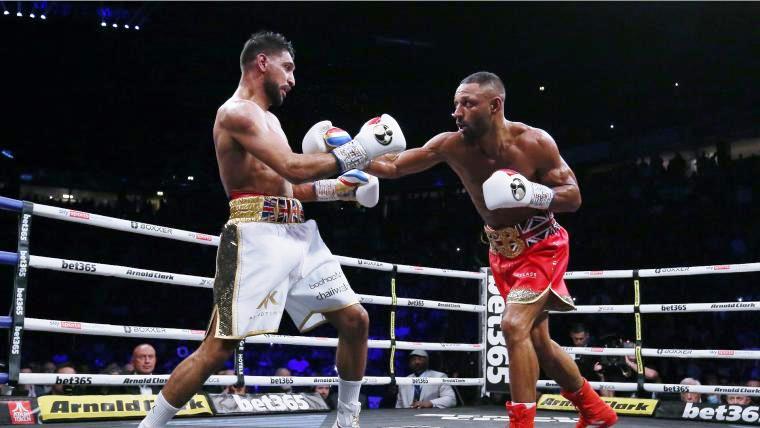 Before they fought one another, Amir Khan and Kell Brook were evenly matched when it came to trash-talking. Once they got in the ring, however, things were one-sided.

Brook turned in a near-perfect performance as he beat Khan via TKO 51 seconds into the sixth round inside the Manchester Arena in England on Saturday night. The fight was a long time in the making, and Brook was ready to end his rivalry with Khan once and for all.

There was controversy before the fight began. A protest by Khan’s team led to Brook changing gloves while he was in the ring. It didn’t appear to change Brook’s ability, however.

Brook started the fight using his jab. He connected with counter jabs as Khan used too much energy early. Brook’s right hand was strong the entire contest, in particular an uppercut that pushed Khan back. He landed combinations that had Khan wobbly and then a right uppercut by the ropes.

Khan attempted to reach for shots but missed, although he did connect with a right. Brook was patient as he pushed forward. He landed a right on the inside, but Khan was able to land a blow to the head as Brook ducked down.

Brook used the jab to his advantage again in Round 3. It looked as if Khan was going to win the round with solid blows but Brook landed multiple uppercuts on the inside and forced Khan to the ropes.

Brook was solid again in Round 4, landing effective shots in the clinch. Things started to look bad for Khan in Round 5 as Brook landed combinations and a hook. Brook landed more combinations that pushed Khan up against the ropes and then continued his assault with uppercuts and hooks. Khan was saved by the bell.

The sixth round was over before it began. Brook had Khan by the ropes right away. He landed an uppercut and inside blows. Khan was trying to play defense again, but he was ineffective. The referee had no choice but to stop the fight.

According to CompuBox, Brook landed 79 shots in 224 attempts while Khan landed 34 of 151 attempts. Brook landed double-digit shots four times, with 21 in the fifth. Khan only threw more than eight shots once.

Brook, a former IBF welterweight champion, is back in the win column. He had his three-fight win streak snapped by Terence Crawford in 2020. Crawford was in the crowd Saturday.