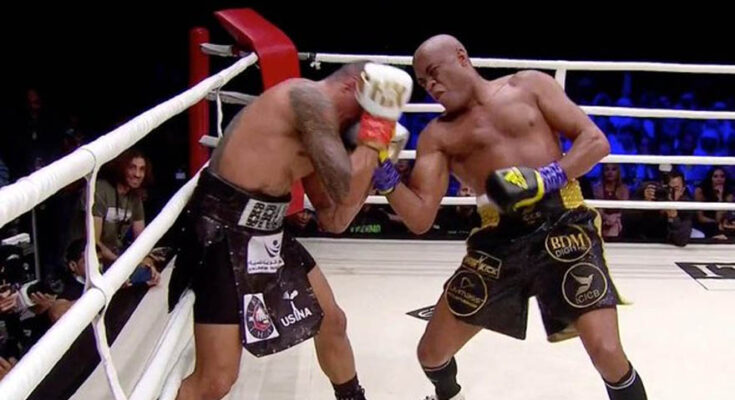 ‘The Spider’ had last competed in September of 2021, where he scored a nasty first round knockout win over Tito Ortiz (see that here). That victory was preceded by a dominant decision win over former WBC middleweight champion Julio Cesar Chavez Jr.

Standing across the ring from Anderson Silva was fellow MMA fighter Bruno Machado, who took the bout on short notice.

This night’s bout resulted in another stellar performance from the 47-year-old former UFC champion. Silva looked sharp in the opening rounds of the fight and scored a nasty knockdown in the fifth round.

Despite being dropped hard, Bruno Machado battled through the adversity to see the final bell.

Because the contest was an exhibition, no winner was declared in tonight’s Silva vs. Machado bout. With that said, it would have been a clear victory for Anderson Silva.

It will be interesting to see what comes next for ‘The Spider’ following tonight’s contest with Bruno Machado.

Rumors have been swirling about a possible pro boxing match against Jake Paul, but nothing has been made official as of this time. ‘The Problem Child’ has gone 5-0 in boxing, defeating MMA notables Tyron Woodley and Ben Askren.

It appears a potential Anderson Silva-Jake Paul bout might be closer to happening than ever before.

Paul “is keen to touch gloves with someone who he previously viewed as his ‘idol,'” Davies added. The YouTube sensation even sent a message to Silva on Twitter following his bout against Machado.

Silva shares a similar interest in fighting Paul, telling Sports Illustrated’s Justin Barrasso that a bout against the 25-year-old is “possible.”

“It’s possible. People need to respect the Paul brothers. Those kids are talented, and they’ve opened people’s eyes about the good and bad in combat sports. I’m preparing my body for a challenge. We’ll see what happens.

“I made the transition from my MMA career to boxing, and I’m doing something I love. I am training hard every day, so I’m not surprised at my success. I’m not impressed yet, either. I have a lot more work to do.”

Silva had an impressive MMA career, going 34-11-0 with one no-contest, including wins over Forrest Griffin, Vitor Belfort and Stephan Bonnar. His last MMA fight was an October 2020 loss to Uriah Hall.

The 47-year-old began his boxing career in Brazil in 1998, when he lost to Osmar Luiz Teixeira by corner stoppage. He didn’t box again until 2005, though this time he defeated Julio Cesar De Jesus by knockout.

After a solid run in MMA, he returned to boxing when he fought Julio Cesar Chavez Jr. in a June 2021 boxing match, winning via split decision to extend his record to 2-1. Since then, Silva also defeated Tito Ortiz by knockout in September 2021.

As for Paul, he recently began training again in March after taking several months off following his win over Tyron Woodley last December. It’s unclear who he will fight in August, though Tommy Fury, Floyd Mayweather Jr. and Oscar De La Hoya are among the potential candidates.