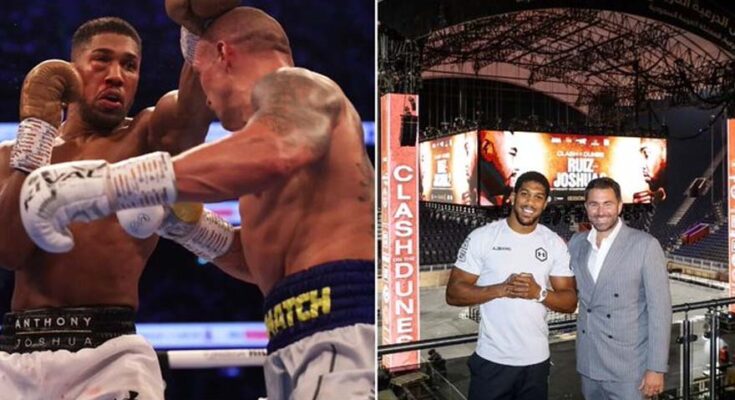 British heavyweight Anthony Joshua shared some of his preparation for his rematch with WBA, WBO and IBF world champion Oleksandr Usik of Ukraine.

According to Anthony, for the first time in his career he is developing a plan for a particular fighter.

Anthony Joshua is admittingly working on an actual game plan for his rematch with IBF/WBA/WBO heavyweight champion Oleksandr Usyk on July 23rd in Saudi Arabia.

For the most part, that style worked for the 2012 Olympic gold medalist Joshua until he met up with Usyk (19-0, 13 KOs) last September and was dealt a disappointing 12-round decision defeat.

Joshua learned a lot from that setback, and he’s since made changes to his training team that he hopes will lead him to a win in the rematch.

AJ hasn’t revealed the game plan for the rematch with Usyk, but he says he wants to return to his old style of fighting. That makes sense because his power game took him this far in his amateur & pro career.

“This is the first time in my career I’d say we are specifically working on a game plan,” said Anthony Joshua about his rematch with Oleksandr Usyk.

“I’ve based a lot of my success on raw ability, but the raw ability wasn’t enough, so now I’m going to try out this game plan training and see how it goes. I plan to go back to the basics and take this guy out,” said Joshua.

Joshua sounds a little confused here. He didn’t employ any of his “raw ability” for his fight with Usyk last September.

He chose not to use his raw talent instead of staying in first gear the entire fight until the 12th round. By that point, Joshua was exhausted & mentally defeated by the master boxer Usyk.

If Joshua returns to his old form, he wouldn’t need a game plan for the rematch because he would be returning to his proper state, a seek & destroy fighter.

That’s Joshua’s DNA as a fighter, and he made a massive mistake in trying to be something that he inherently wasn’t made for in choosing to box Usyk in the first fight.

“I always said, who am I without the belts? Even when sitting here, I’m not a champion right now,” said Joshua. “Even when I took that hit [losing to Andy Ruiz Jr in June 2019], it started unfolding that championship status.

“I wasn’t the champion anymore; I’d already prepared myself for the stumbling blocks of the game that I’m in.

“It’s about rebuilding, staying strong, and staying championship mindset, even though you don’t have the titles. Even in taking that knock, it’s just part of the journey I’m on,” said Joshua.