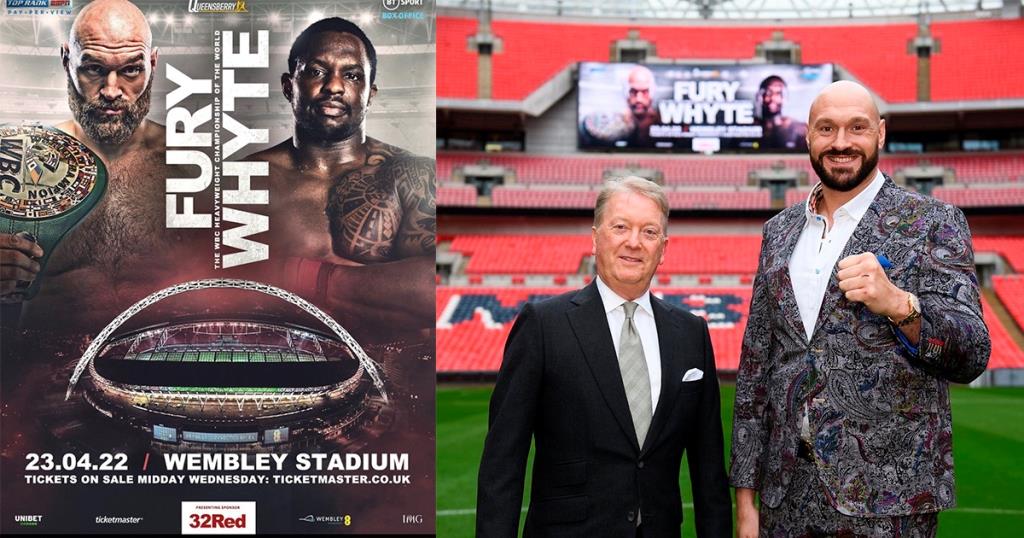 In a recent interview with iFL TV, Frank Warren stated that he believes Tyson Fury will knock out Dillian Whyte in their Heavyweight title clash on April 23rd at Wembley Stadium.

“Tyson is a fighter that can box, he can stand and trade, he can punch, he can take a shot, he’s got good recovery powers, he’s got fast hands, he’s got great footwork, he switch-hits. I don’t think that anyone can live with Tyson at the moment. I think Tyson is a very special heavyweight. I think he’ll get to him and I think he’ll stop him,” said Warren.

Tyson Fury vs. Dillian Whyte is set to be the biggest Heavyweight showdown in UK history with over 90,000 expected to attend. The two Brits will battle it out for the WBC and Lineal Heavyweight titles.

Fury is a strong favorite going into the fight against Whyte. ‘The Gyspy King’ is undefeated and recently displayed incredible courage to defeat the hard-hitting Deontay Wilder for a second time.

However, some boxing experts are giving Whyte a puncher’s chance to cause an enormous upset. Here’s what former British Heavyweight Champion David Price had to say on The Heavyweight Landscape:

“He’s an underdog but a live underdog, he’s got one of the best left hooks in the division.”

At six foot nine, Tyson Fury is the tallest opponent that Dillian Whyte will face in his professional career. Hence, ‘The Gypsy King’ will have a massive height, reach and weight advantage when the two boxers meet in the ring.

Despite not being known for his punching power early on, Fury has two knockouts in his last two bouts against Deontay Wilder. Since teaming up with Sugar Hill, the man from Manchester has been more aggressive and willing to trade punches with his opponents.

It is yet to be seen whether Fury decides to pressure Whyte or box on the back foot. However, ‘The Bodysnatcher’ was knocked out by Alexander Povetkin in 2020 and there are questions regarding his ability to take a shot.