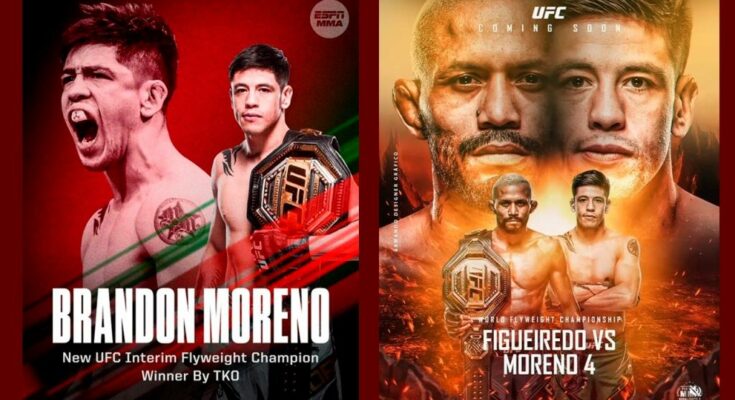 The Mexican star can’t wait to put his rivalry with Deiveson Figueiredo to rest now that he won the UFC interim flyweight title. Brandon Moreno(20-6-2 MMA, 8-3-2 UFC) won the belt by defeating Kai Kara-France by TKO Saturday at UFC 277.

The victory now sets up a fourth bout with Figueiredo. The two are tied in their championship rivalry at 1-1-1, and they’ve swapped the undisputed title at 125 pounds.

“It’s not like, ‘Oh, I want to fight against Deiveson Figueiredo again,’” Brandon Moreno told reporters at the UFC 277 post-fight news conference. “I’m not excited. I’m done with him.

“But it is what it is. He’s the champion, so I want to fight against him. So I promise I just want to finish my business with him and then the next challenger, I’ll be ready for him.”

Brandon Moreno first fought Figueiredo in December 2020 and since they’ve fought twice more consecutively. They were supposed to fight this summer in their fourth outing, but Figueiredo had to sit out due to injury, thus creating the interim title.

Brandon Moreno doesn’t care if the unification bout goes down in Figueiredo’s home turf. He just wants to fight soon and get the rivalry over with.

“I don’t care – we can go wherever. We can go to Brazil,” Moreno said. “The problem is, he said he’d be ready for the winter, for December, and the last pay-per-view of the year is normally in Vegas. So we’ll see what happens in the future. I just want to fight before the end of the year. I’ve just been waiting for him for a long time.”

Some have questioned if Figueiredo would go through with the title defense given his size and tough history trying to make the 125-pound limit. Moreno thinks there’s something to that, but wouldn’t make any assumptions.

“You see the guy when he arrived to the arena, he looks (like he’s) in another different division,” Moreno said. “I’m saying I want to stop the hate, but I’m not trying to be disrespectful. I don’t know. Hopefully he can be ready in December, and that’s it.”