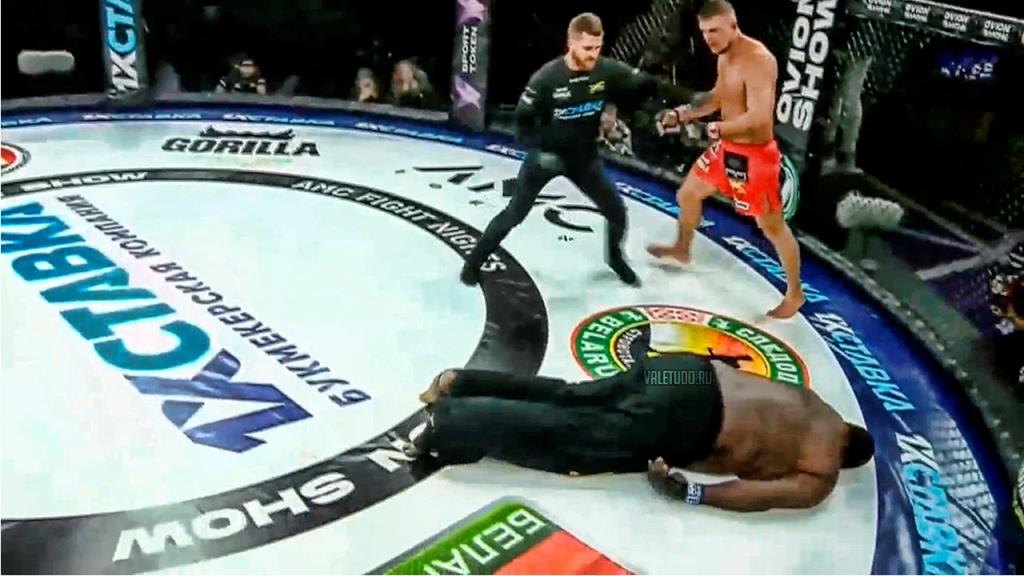 Brazilian MMA veteran Zuluzinho was on the receiving end of one of the year’s most devastating knockouts when he was flatlined by Belarusian fighter Petr Romankevich in the headline fight at AMC Fight Nights 114 in Minsk on Saturday night.

Zuluzinho, 44, who is the son of the legendary fighter Rei Zulu and was once an opponent of Russian icon Fedor Emelianenko, has become something of a journeyman in his latter career, competing in various countries like Serbia, Russia and, on Saturday, Belarus – but even with a career record which shows 11 defeats against just 14 wins, rarely has he been finished in quite as spectacular a manner as by the one handed to him by Romankevich.

But it didn’t come without a bit of controversy.

Zuluzinho, who weighs close to 400lbs, had advanced to the mount position towards the end of the first round and was working towards locking in a keylock submission when the overly-eager referee opted to stand the fighters up with around ten seconds remaining the opening round.

That was the only invitation that Romankevich needed.

Moments after the restart, the Belarusian fighter landed a flush left high kick which staggered the Brazilian behemoth before he landed another flurry on the advancing fighter, immediately separating him from his consciousness and sent him sprawling face-first to the mat.

It was a very controversial call for the referee to stand the two fighters up when Zuluzinho was clearly working towards a submission, though it has been suggested that the move was due to a recent rule imposed by the Russian MMA league AMC Fight Nights which allows referees to intervene after one minute of fighting on the ground.

Either way, Zuluzinho clearly won’t be happy with the official’s interjection.