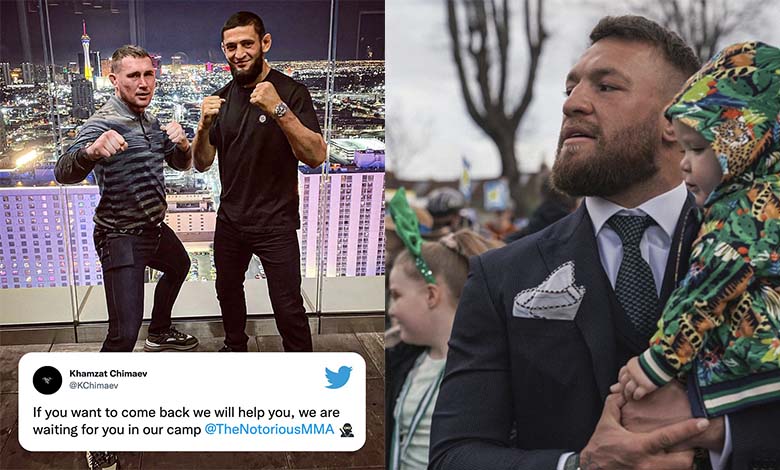 Khamzat Chimaev recently invited Conor McGregor to train with him and Darren Till ahead of the Irishman’s much-anticipated return to the octagon. Reacting to Chimaev’s invitation, former UFC heavyweight Brendan Schaub claimed that there’s no way McGregor will accept the rising star’s offer.

“If you want to come back we will help you, we are waiting for you in our camp @TheNotoriousMMA”

McGregor hasn’t competed in the UFC since suffering a gruesome leg injury against Dustin Poirier in July 2021. The former two-division UFC champion could be returning to the octagon later this year.

In a recent episode of The Schaub Show, Brendan Schaub claimed that a fight between McGregor and Chimaev is never going to happen and that ‘The Notorious’ should take ‘Borz’ under his wing. Schaub said:

“If I’m Conor McGregor, I’m taking Khamzat under my wing man, like a Paddy Pimblett under my wing and like, ‘Hey, let me show you, like let me help you.’ Makes sense because Khamzat and Conor, they’ll never fight, that’s never happening, there’s no threat there. Conor’s just a different animal though, I don’t think he’s going to go there to maybe train but you know, he’s just a different animal.”

Khamzat Chimaev will be returning to action at UFC 273

Khamzat Chimaev’s next appearance in the famed octagon will be at UFC 273 on the April 9th. He is set to take on former UFC welterweight title challenger Gilbert Burns, who promises to be Chimaev’s toughest test to date in the UFC.

Chimaev made his promotional debut in 2020 and within his first year in the promotion, he defeated John Phillips, Rhys McKee and Gerald Meerschaert. In 2021, the undefeated fighter beat Li Jingliang via a rear-naked choke at UFC 267 to break into the welterweight rankings.

Burns, who is ranked No.2 in the 170 lbs division, is coming off a unanimous decision win over Stephen Thompson at UFC 264 last year. He has lost just once in his last eight fights and will be looking to re-enter the title picture with a win over Chimaev at UFC 273.