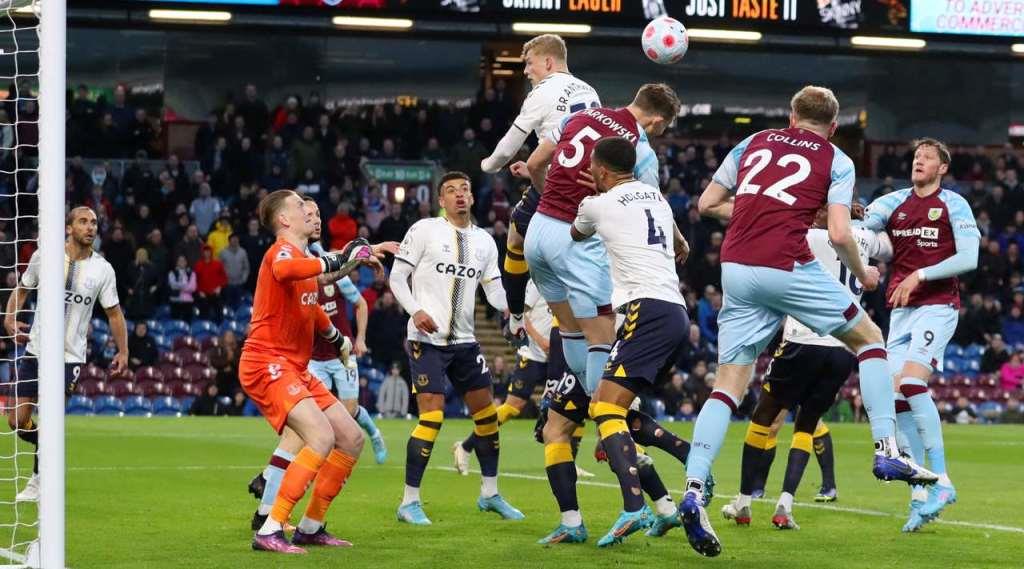 Burnley moved to within a point of safety after a nerve-shredding 3-2 victory over Everton at Turf Moor. Maxwel Cornet’s late winner condemned the ‘Toffees’ to an 11th away Premier League (PL) defeat of the season, leaving them under huge threat ahead of a daunting run-in.

The ‘Clarets’ had failed to score in over 400 minutes of PL football prior to this relegation six-pointer, but Everton seemed to be perfect opponents as they’d conceded 11 in their previous 3 away fixtures.

Frank Lampard looked on in horror as the hosts needed just 12 minutes to take the lead, when Cornet’s corner found an unmarked Nathan Collins at the back post to stroke home.

Luckily for them, that record wasn’t extended as Ashley Westwood handed the visitors a route back into the contest by conceding a penalty just four minutes later. The midfielder bundled Anthony Gordon over inside the box, allowing Richarlison to convert from 12 yards for his first goal in 10 league games.

Everton assumed control of the contest after their equaliser, pushing the hosts deeper into a low block as HT approached.

That pressure would eventually tell, with Vitaliy Mykolenko winning his side’s second spot-kick of the half after being fouled by Aaron Lennon. Richarlison showed the same nerveless poise to send Nick Pope the wrong way and give the visitors a priceless lead.

Turf Moor was awash with nerves as a pivotal second half commenced. With Sean Dyche’s unmistakable voice still ringing in their ears, the players responded by levelling proceedings 10 minutes after the restart.

Charlie Taylor drove at the byline before pulling the ball back for hometown hero Jay Rodriguez to smash home from close range.

Burnley retreated into their shell after their second equaliser, and needed Pope to deny Richarlison sealing a hat-trick with a spectacular bicycle kick.

Moments later, the ‘Clarets’ were caught out on the counter, and Gordon would have scored if it were not for a last-ditch block from James Tarkowski.

However, Everton’s shambolic defending would come back to bite them once more as Burnley struck a dramatic winner in the closing stages.

Ben Godfrey’s poor clearance allowed Matěj Vydra the chance to square to Cornet, and the Ivorian made no mistake. Just a fourth league win of the season breathes fresh life into the ‘Clarets’ survival bid, especially as Everton still face fixtures against Liverpool, Chelsea, and Manchester United.