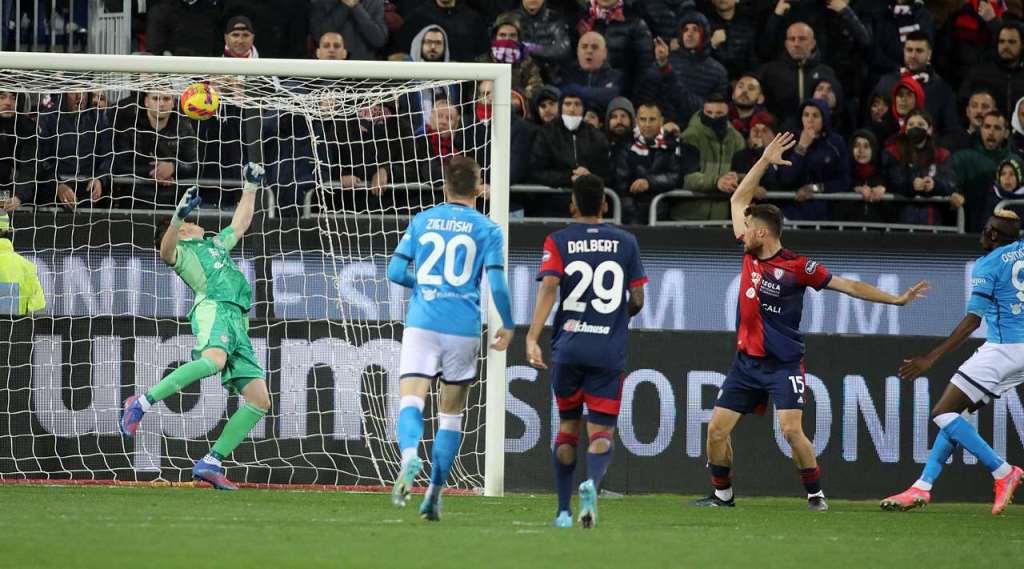 Napoli failed to capitalise on AC Milan and Inter dropping points, after they too dropped points in a 1-1 draw away to Cagliari.

Victor Osimhen’s late equaliser just about saved Luciano Spalletti’s side from the jaws of defeat.

If Napoli could overcome an improving Cagliari side that had recorded just one Serie A defeat in 2022, then they could leapfrog AC Milan to the top of the table following their surprising draw with Salernitana.

The first chance of the game fell to ​​Giovanni Di Lorenzo, whose superb first time strike forced Alessio Cragno into a smart save. At the other end of the pitch, João Pedro failed to make the most of a poor Kalidou Koulibaly clearance, putting his effort wide of the post.

The visitors lack of firepower was noticeable in the opening 30 minutes, especially without their captain Lorenzo Insigne who was missing due to injury and top scorer Victor Osimhen on the bench.

Mário Rui had Napoli’s best chance of the half, dribbling past three defenders before testing Cragno from long range. Despite growing into the game during the latter stages of the first half, Cagliari were certainly the happier team going in 0-0 at HT.

The hosts started the second-half at a ferocious pace, and should have taken the lead through Alessandro Deiola but the midfielder smashed his shot wide from close range. Just shy of the hour mark Cagliari got their breakthrough courtesy of an Ospina howler, Gastón Pereiro’s tame shot was palmed into the bottom corner by the Napoli keeper to make it 1-0.

To Ospina’s credit he redeemed himself moments later, saving a powerful Deiola header to keep his side in it at 1-0. Napoli had to turn to their big guns on the bench to dig themselves out of trouble and it worked.

Rui’s wonderful cross picked out Osimhen at the back post who made no mistake with his header to bring the scores level with moments remaining. The last gasp draw keeps Cagliari in the relegation zone and Napoli in third two points behind leaders AC Milan.