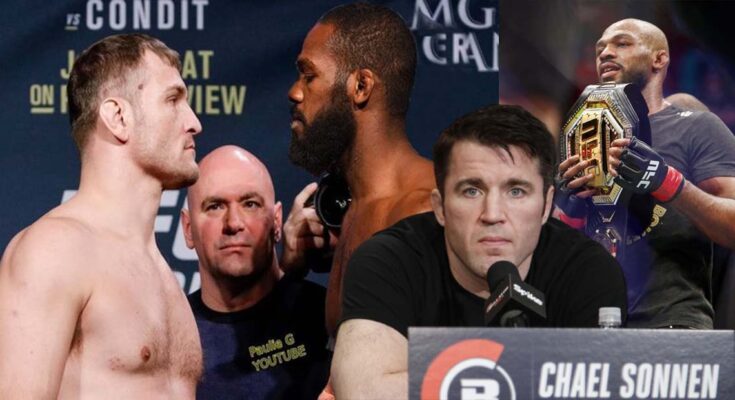 During an episode of Beyond the Fight on his YouTube channel, ‘The Bad Guy’ discussed Jones stepping up to heavyweight. Sonnen analyzed the move’s viability, considering the lack of exciting matchups in the division as opposed to the 205lbs weight class:

“Jon Jones at heavyweight versus Stipe Miocic is a very interesting match. The winner of that match, whoever it is, versus Francis Ngannou, we got some really good business. But now you go, you tell me, ‘What do you do next?'”

“Things have changed since Jon stopped? Heavyweight has changed but so has 205. I’m only asking if you’re to look at both of them specifically for matchups, specifically for drawing ability for Jon, which division would you rather see him at?”

Chael Sonnen also discussed the evolution of the 205lbs division since Jones’ departure. He listed a host of intriguing matchups for the former champion should he return to his old weight class. ‘The American Gangeter’ also dived into whether Jones could make 205lbs again, which he deemed possible.

UFC president Dana White says Jon Jones could finally return to action this summer in a blockbuster fight against the most successful heavyweight champion of all-time – Stipe Miocic.

Jones hasn’t fought for more than two years after defending his light-heavyweight title against Dominick Reyes at UFC 247 in February 2020.

“Listen, people have been talking about how awesome this card is, and I was just telling somebody the other day our line-up for this summer is incredible,” White told TMZ Sports “I’m hoping that Jon Jones is gonna be a part of that line-up this summer.”

The UFC boss added that “Stipe makes sense” when quizzed about who Jones will face in his eagerly anticipated return to the Octagon later this year.

‘Bones’ relinquished his 205lb title in the aftermath of his win over Reyes, announcing his intention to pursue a career at heavyweight.

Despite seriously bulking up he’s yet to make his divisional debut as a financial dispute with the UFC threatened to bring a premature end to his MMA career.

Ngannou is tied to the UFC for three more fights or one year – whatever comes first – due to a championship clause in his contract. However, the 35-year-old recently underwent knee surgery that is expected to keep him sidelined until the end of 2022.

The Cameroonian knockout artist has expressed his desire to cross over into the world of boxing to test himself against the likes of Tyson Fury, Deontay Wilder, and Anthony Joshua.

As White tries to convince his heavyweight champion to remain with the UFC, an interim title is likely to be created. If all goes to plan, Jones will fight Miocic for the belt in the coming months, with the winner unifying the division against Ngannou down the road.

‘Bones’ also discussed his potential showdown against Stipe Miocic when he recently went live on Instagram. When asked about his UFC comeback, Jon Jones replied that he’s looking at a September return against the former heavyweight champion, but the fight is being delayed:

“Somebody said when am I fighting again? I’m hoping to fight Stipe Miocic maybe September. I don’t really know. UFC has been playing them games.”