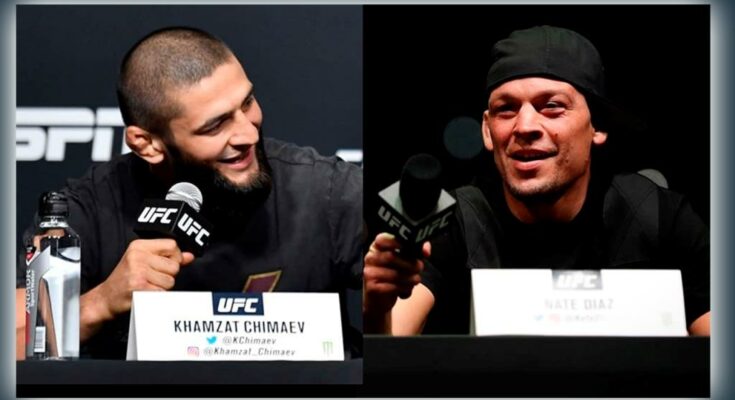 Authoritative MMA analyst Chael Sonnen believes that the fight of top UFC welterweight prospect Khamzat Chimaev against Nate Diaz could not take place because of the principles of the American star veteran.

Sonnen suggests that Diaz at one time refused to fight Chimaev, because his brother Nick was interested in a fight with Khamzat.

Khamzat Chimaev has laid down the marker in the UFC after his impressive run since joining the UFC. The Dagestani fighter has been compared to new Hall of Famer Khabib Nurmagomedov but is adamant about carving his own legacy.

One of his new admirers includes former UFC middleweight Chael Sonnen. ‘The Bad Guy’ has been impressed by the Swede since his debut, even notching up a tough victory over Gilbert Burns. However, a potential blockbuster fight for Khamzat Chimaev has been discussed with veteran Nate Diaz in the last few months. The fight has failed to materialize due to various issues, and Sonnen believes there is a certain reason for it.

In an episode of Beyond The Fight, Sonnen said:

“I’m a little bit light on the Chimaev angle, only because the first time I heard Chimaev was October, possibly November of last year, and it was for Nick Diaz. Then, somewhere near the end of 2022, it became Nate. But, that could be a dealbreaker. Nate has a code. A fight that was associated with his brother that he would never take in case his brother still wants it.”

Watch the full video, how Chael Sonnen offered an interesting hypothesis why Nate Diaz refused to fight Khamzat Chimaev below: