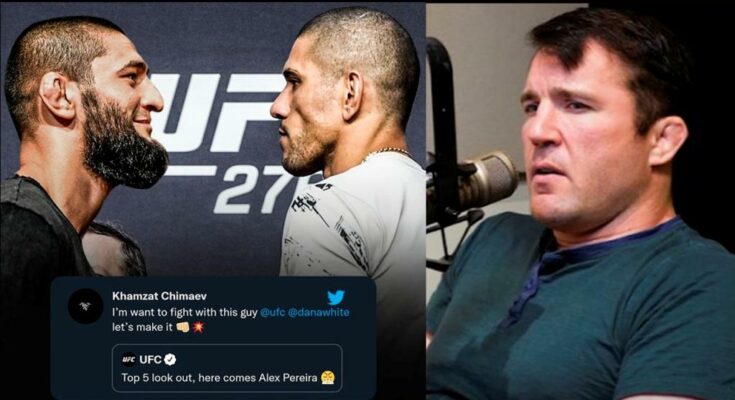 After Pereira’s win over Sean Strickland at UFC 276, Chimaev rather unexpectedly expressed his desire to fight the Brazilian. Sonnen believes that “Borz” decided to make this challenge because he wants some certainty in his career.

In the aftermath of his scintillating performance, ‘Borz’ took to social media in a bid to train his aim at the Brazilian. He called upon Dana White and the UFC matchmakers to give him the opportunity to derail the ‘Poatan’ hype train.

In a video uploaded to his YouTube channel, ‘The American Gangster’ asserted that Chimaev is lobbying for a fight against Pereira because he is uncertain about the ideal weight class for himself.

Furthermore, a fight against Pereira would be the No. 1 contender’s fight as the Brazilian has been recognized as the next contender for the 180lbs strap by the champion himself.

Sonnen further confirmed that a fight against the Brazilian could put ‘Borz’ in the perfect position to compete for the title. Here’s what Chael Sonnen had to say about the same:

“That was a very telling moment okay… Chimaev wanted a match that would give him clarity. We have no clarity on Chimaev. I mean, us, the audience, we now know that Chimaev doesn’t either… If he could get the match with Pereira, that would solidify him at a weight class even if it’s not ideal, he does not care. It’s now a weight class that solidifies him in a number one contender’s match. He now has clarity.”

Check out Chael Sonnen’s take on Khamzat Chimaev’s situation below: