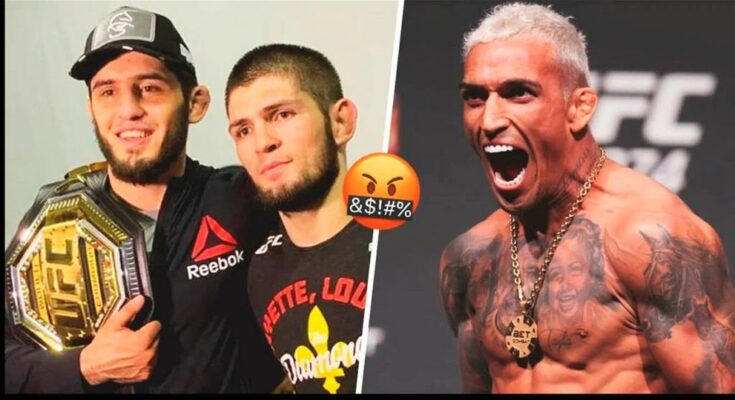 Charles Oliveira and Islam Makhachev have been paired up to clash for the vacant lightweight title next at UFC 280 in Abu Dhabi. And prior to the fight being made official, Oliveira shared his own idea of how Makhachev got to the dance.

Speaking to ESPN Brazil, Oliveira said he believes Makhachev having the backing of UFC Hall Of Famer Khabib Nurmagomedov has certainly helped his stock in the UFC, potentially even playing a role in landing him in the top spot of the 155-pound division.

“In reality, I think that he has his merits. He has been on a long winning streak. If I’m not mistaken, it has been 11 in a row, right? Or something like that. But, on the other hand, Khabib [Nurmagomedov] also has a huge weight. Having that man on your back, whether you like it or not, gives it weight. He retired undefeated and all the history of what he has done.

“So, whether you like it or not, it does have weight. But in my mind, I think that he should have to do one more fight in order to fight for the belt.

Makhachev currently finds himself on a 10-fight win streak. He’s the No. 4-ranked lightweight in the UFC as of this writing.

As for Oliveira, he’s on an 11-fight win streak which included a brief stint as lightweight champion before being stripped due to missing weight. However, his run of dominance as of late leaves no doubt he’s the man to beat at 155 pounds in the UFC.

Khabib Nurmagomedov believes, when it’s all said and done, Islam Makhachev has the potential to surpass him as the lightweight division’s greatest of all time.

Nurmagomedov was recently interviewed by TMZ Sports, and asked about his rising star pupil. “The Eagle” was asked if he thinks Makhachev has what it takes to surpass his own legacy in the lightweight division — arguably the greatest of all time.

With a big win over Charles Oliveira for the lightweight title and victories over some fellow young UFC contenders, Nurmagomedov believes Makhachev can do exactly that.

“Definitely it’s possible,” Nurmagomedov said. “Right now it’s like — this is legacy fight for Islam. Why I want him to fight Charles Oliveira — because he’s on an 11-fight win streak.

“Let these guys fight. If Islam beats Charles, and then he beats new blood from young generation — we have a lot of young fighters in lightweight division rankings.

“Beneil [Dariush] — stopping Charles, stopping three more fighters, Islam can become greatest lightweight ever. He has that potential, he’s only 30-years-old, but UFC has to give him chance. This is the deal.”

Makhachev is on a 10-fight win streak and is currently the No. 4-ranked lightweight in the UFC. He’s among the top of the list when it comes to potential next challengers for Charles Oliveira and the lightweight title.