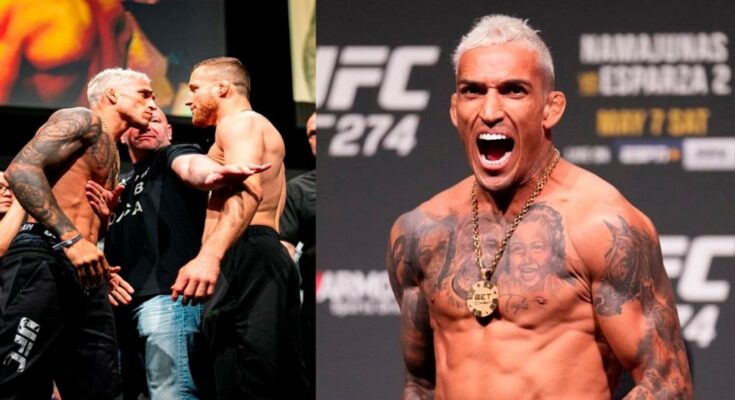 Already a former UFC lightweight champion, Brazilian Charles Oliveira commented on his weigh-in result before his fight with American Justin Gaethje ahead UFC 274.

Charles Oliveira wants two things to be clear. One, he still considers himself champion – and two, he was as surprised as everyone else when he missed weight Friday at the UFC 274 official weigh-ins.

Oliveira, who came in one-half-pound over the championship lightweight limit ahead of his main event scheduled for Saturday against Justin Gaethje, claims to have made weight Thursday night.

According to Oliveira, without eating or drinking, he somehow missed weight after hours more of non-nutrition.

“The champion has a name. His name is Charles Oliveira,” Oliveira said with the use of an interpreter on the ESPN ceremonial weigh-in broadcast. “The story is that I went up to my room. I made weight on the UFC scale on Thursday night. I go up to my room (and) didn’t consume anything. No water, no food, no anything. I swear to God. In the name of my daughter, the most sacred thing in my life. I went to bed. I wake up the following day and it’s a pound over.

“I’m looking at it. I’m one kilogram over, actually. I’m one over and I don’t understand what happened. I can’t understand. We work. We’re professionals. I didn’t do anything wrong. To me, it just didn’t make sense. Other fighters started talking about it as well. They started talking about those 200 grams, 300 grams. It was exactly the difference of the scale with the UFC. This is what we’re going back to. The champion has a name. His name is Charles Oliveira.”

Following Oliveira’s weight miss, numerous fighters publicly via social media, and privately in text exchanges with MMA Junkie, claimed the test scale fighters used all week was wrong until early Friday morning local time, at which point it was recalibrated. The change in calibration threw fighters for a loop when they showed up heavier than they expected.

Oliveira, 32, struggled to hit his marks on the scale early in his career, but had not missed weight since December 2015. With Friday’s development, Oliveira will be stripped of his title the moment his UFC 274 fight starts Saturday. If Gaethje wins, he becomes champion. If Oliveira wins, he earns himself a shot at the vacant title the next time the 155-pound belt will be up for grabs.

UFC 274 takes place Saturday at Footprint Center with the main card streaming on ESPN+ pay-per-view after prelims on ESPN/ESPN+.