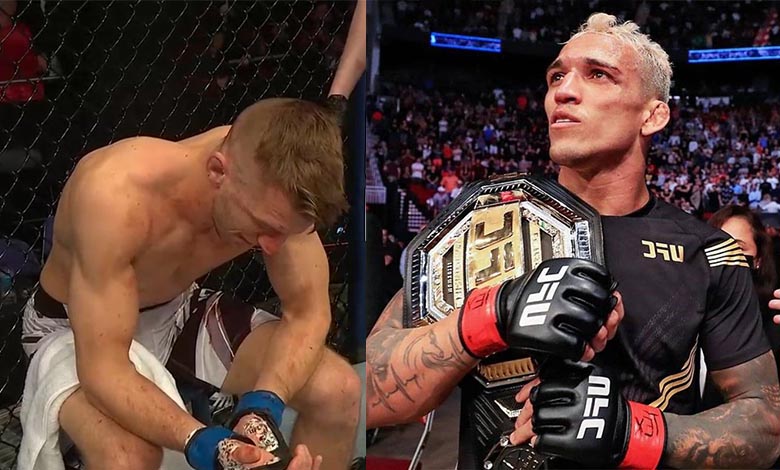 Charles Oliveira has shown his support for Dan Hooker after ‘The Hangman’ suffered a first-round TKO loss against Arnold Allen at the recently concluded UFC London event. This was Hooker’s fourth loss in his last five fights and things don’t look good for the City Kickboxing fighter right now.

In a recent tweet, ‘Do Bronx’ wished Hooker well for the future and said he hopes that the 32-year-old can bounce back from the setbacks he’s suffered lately. The Brazilian champion tweeted:

“I wish him the best, and I hope he can rebound from these setbacks. God bless you and your family, @danthehangman”

The Kiwi fighter has been a staple in the lightweight division over the last few years. After the loss to Islam Makhachev in October last year, Hooker decided to return to the featherweight division to take on Allen. Going into the bout, the Brit was on an eight-fight win streak in the UFC.

What’s next for Dan Hooker and Charles Oliveira?

Despite Dan Hooker suffering yet another first-round loss inside the octagon, his boss Dana White was full of praise for ‘The Hangman’ following the fight. The UFC president said he loved the bout and complimented Hooker for making weight and indulging in a slugfest with a top contender at 145 lbs.

He also suggested that Hooker can decide whether he wants to continue fighting at 145 lbs or return to lightweight going forward. At the post-fight press conference for UFC London, White said:

“He came in and performed tonight. He made weight, he came in and went to war with a guy that’s undefeated in this weight class. And he can do whatever he wants to.”

Charles Oliveira is set to make his second title defense against Justin Gaethje in the headliner of UFC 274 on May 7. The Brazilian is on an incredible 10-fight winning streak inside the octagon right now and will be looking to extend the same when he takes on ‘The Highlight’ later this year.