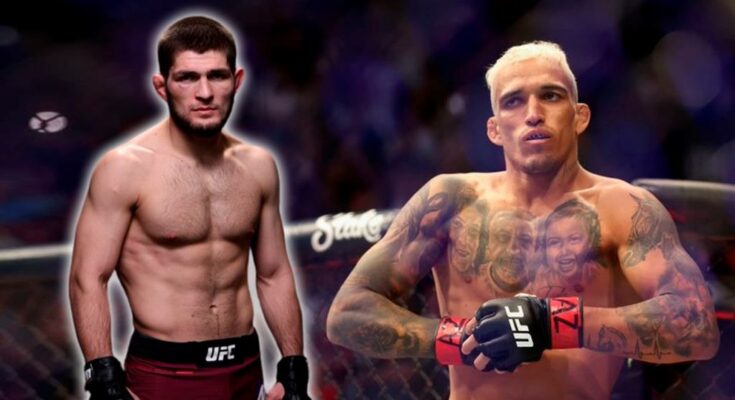 Former UFC lightweight champion Charles Oliveira hopes to get a fight with Khabib Nurmagomedov, who is now promoting the idea of a fight of the Brazilian for the vacant title against his friend Islam Makhachev.

Khabib Nurmagomedov has been backing Islam Makhachev to get a crack at the vacant UFC lightweight strap.

With Oliveira likely to be on the other end of the title fight, Nurmagomedov is confident that Makhachev could submit “Do Bronx” and it doesn’t matter if it takes place in front of his hometown fans in Brazil.

As expected, the proud Charles Oliveira did not appreciate what Khabib Nurmagomedov said.

According to Oliveira, he has the utmost respect for his fellow former champion but since “The Eagle” has been running his mouth lately, “Do Bronx” now wants him to come out of retirement and face him after he stop Makhachev. Of course, Oliveira wants it to happen in Brazil as well.

“If they really want it, they need to chase the champion,” Oliveira told Ag. Fight. “I chased the champion, right? Then I became the champion. I want to fight in December. Do you really want this? So let’s do something cool. Now I’m talking to you. Let’s fight in January in Brazil? Isn’t that what you really want? So sell it more. But look at this, Khabib, you’ve already tried three premonitions about me and missed all three.

“Look, I won’t say I’m going to submit or knock him out, but I’ll beat him. Listen to this: I will beat Islam Makhachev. The division’s problem is called Charles Oliveira. That’s the division’s problem. It doesn’t matter what they say. If they really want it, I want it, too.

Oliveira has doubled down on his interest to take on Conor McGregor for the money several times. However, Nurmagomedov’s comments got him changing his mind.

“Forget it. In Brazil, Charles Oliveira against Islam Makhachev. Is this the fight you want? So we will have it. Charles Oliveira against Islam Makhachev in Brazil. I’ll beat him (Makhachev). So who knows, maybe you (Nurmagomedov) come of retirement and come too?” Oliveira said. “Each one says what they want. I am the division’s problem. I have one of the best jiu-jitsu (games) in the division and in the UFC. I think these guys are talking too much. They want to get in my mind, but that’s not possible.”

“(Khabib) was champion, 29 wins in a row, and never said anything,” Charles Oliveira continued.

“He always sold the fight in a good way, really damn well, and today he is always talking a lot, and if it’s to talk, I’m gonna say it: I’ll beat Islam Makhachev and then challenge Khabib to come back from retirement. It’s the fight everyone will want to see. Isn’t that what everyone will want to see? Everyone says Khabib is f*cking tough. I respect him a lot, but lately, he’s been talking too much.”

With both parties already promoting the fight, fans will surely be waiting for the UFC’s take on Oliveira vs. Makhachev. Whether it will happen in Brazil or not is also one thing to look forward to.