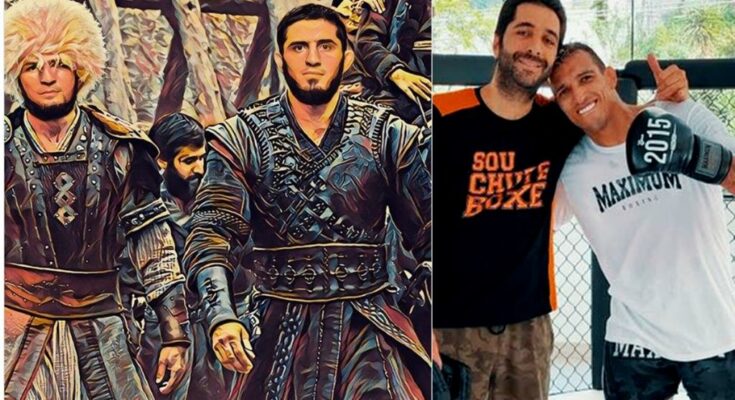 Charles Oliveira’s coach Diego Lima doesn’t think Islam Makhachev is deserving of a title shot yet. While the Chute Box chief acknowledged Makhachev’s impressive skillset, he noted that the Dagestani standout is yet to fight an opponent ranked in the top five at 155 pounds.

However, Khabib Nurmagomedov wants to see Charles Oliveira take on his prodigy Islam Makhachev in a title fight.

The former undefeated lightweight kingpin lobbied for a title shot on Makhachev’s behalf, moments after Oliveira submitted Gaethje in the main event of UFC 274. Taking to Twitter, the Dagestani wrote:

“Is there really a more interesting duel in the UFC at the moment than Islam vs. Charles. Just bring these fighters to Abu Dhabi on October 22nd. Let the undisputed champion be determined.”

Oliveira, of course, is still the top fighter in the division despite his dicey status. He was recently stripped of the lightweight title after failing to make weight ahead of his supposed title defense against Justin Gaethje. The fight went on as scheduled, but the belt was only on the line for Gaethje.

The main event of UFC 274 was another classic Oliveira comeback. Just like in his previous two title fights, the Brazilian survived a knockdown early in the fight before bouncing back with a submission victory.

According to Lima, Makhachev, like others before him, should be put through tougher tests like Michael Chandler and Justin Gaethje before making a bid for UFC gold. Oliveira’s coach also noted that Tony Ferguson couldn’t secure a shot at undisputed gold even after notching a 12-fight win streak.

Islam Makhachev is yet to fight a top five lightweight contender with his most notable opponents arguably being Dan Hooker, Bobby Green, Drew Dober and Thiago Moises. Meanwhile, both Chandler and Gaethje have come up short in their bid for lightweight gold against Charles Oliveira.