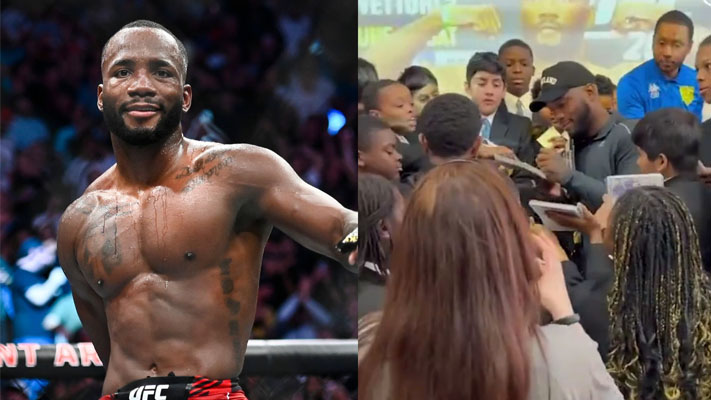 Welterweight champion Leon Edwards recently returned home to show off his UFC gold at his old school in Birmingham, UK and was met with a welcoming crowd.

Edwards stunned the world at UFC 278 when he fought Kamaru Usman for the welterweight title on August 20.

‘Rocky’ was 3-1 down on the judges’ scorecards heading into the fifth round and staring down the barrel of defeat. Much like a true Rocky story, the 31-year-old clutched victory from the jaws of defeat. His vicious head kick knocked out ‘The Nigerian Nightmare’ with just under a minute remaining.

In the touching video shared by @btsportsUFC, the children at Birmingham were ecstatic when their hometown hero walked through the doors. Leon Edwards was greeted with a round of applause from the pupils before spending time chatting with them and signing autographs.

‘Rocky’ is expected to headline a UK card in his first title defense next year. According to reports, Dana White is looking at Cardiff, Wales as a venue. Edwards and Usman will complete their trilogy if they headline the card, with Khamzat Chimaev vs. Colby Covington also in the works to feature.

Edwards will be hoping he can follow in the footsteps of former middleweight champion Michael Bisping. ‘The Count’ captured the title from Luke Rockhold and successfully defended the title on home soil against Dan Henderson months later.

Kamaru Usman will be entering uncharted territory if he rematches Leon Edwards for the welterweight title.

Usman dominated for large periods during their bout at UFC 278. However, ‘Rocky’s vicious head kick handed ‘The Nigerian Nightmare’ only the second loss of his MMA career and the first KO loss he has suffered.

In a video uploaded to his YouTube channel, Michael Bisping explained why he doesn’t believe Usman’s path to victory is straightforward. ‘The Count’ stated that recovering from a knockout loss is easier said than done:

“Some people are able to say, ‘You know what? That happened then, tonight is a different night.’ But some people carry that into them, some people have fear, some people let it make them freeze, some people can’t handle the pressure after getting knocked out like that.”

Bisping further claimed that Usman might prove to be a big challenge for Edwards:

“So we never know, there’s questions on the Usman side. If I’m honest, I think he’ll be okay. I was okay. Usman was a great champion, he was pound-for-pound number one for a while. So I think he’s more than capable of being able to shut off those demons and fight to the best of his ability. That doesn’t mean he wins the fight. It’s going to be a great fight.”