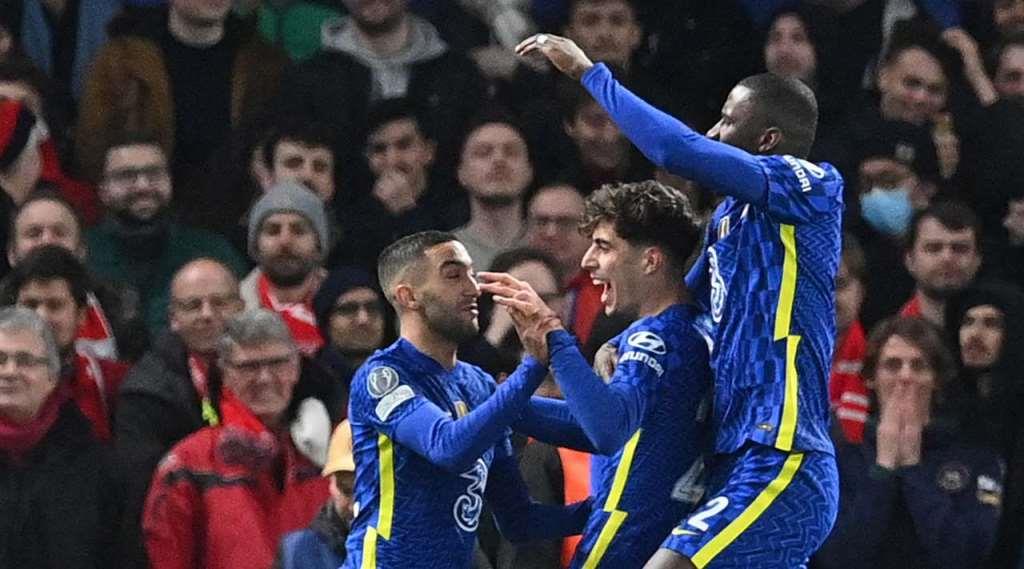 Chelsea extended their winning run across all competitions to six games, beating an ineffectual Lille side 2-0 at Stamford Bridge ahead of the Carabao Cup final against Liverpool on Sunday.

Kai Havertz was selected by Thomas Tuchel to lead the line, deputising for the much-maligned Romelu Lukaku, and the German star could have had a hat-trick inside the opening ten minutes.

First, his outstretched toe could not apply the finish to César Azpilicueta’s low cross before his bending left-footed curler was well tipped around the post by Léo Jardim.

Chelsea have scored more goals from corners than any other team in the Champions League this season and from the resulting set-piece, the former Bayer Leverkusen forward made the breakthrough, heading in Hakim Ziyech’s corner much to the delight of his manager.

The ‘Blues’ have won their last four UCL games on home soil without conceding a single goal, but Havertz’s opener seemed to settle Lille down as Renato Sanches started to dictate play from central positions with the lively Jonathan David breaking the lines at every opportunity.

Before winning the 2021 edition, Chelsea had an alarming record of four consecutive last-16 exits in this competition, but they are no strangers to defying expectation and, midway through the second half, tightened their grip on this tie.

N’Golo Kanté burst forward before calmly slotting through to Christian Pulisic, who lifted the ball over the onrushing keeper and into the corner of the net to double the hosts’ lead.

Thomas Tuchel’s men have already won two trophies this season, could claim a third in Sunday’s Carabao Cup final, and have now put themselves in a commanding position to make the quarter-final stage in Europe’s premier club tournament ahead of their trip to Lille next month.

Meanwhile, for the visitors, this result is just an extension of their disappointing form in Ligue 1, where they sit 11th in the table despite having been crowned champions last term.