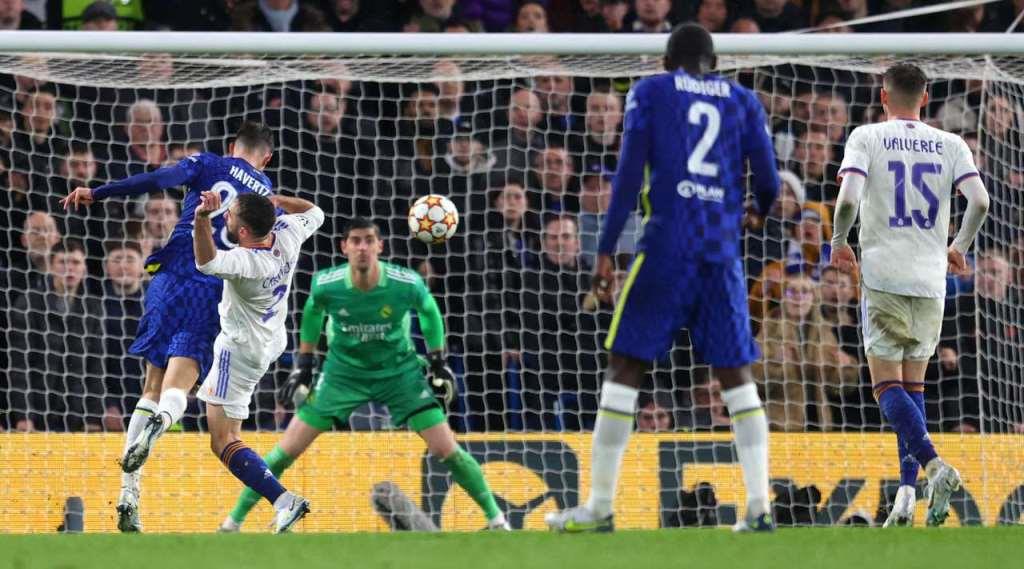 Benzema’s 10th goal in his last four matches put ‘Los Blancos’ in the driving seat to set up a potential semi-final showdown against fierce rivals Atlético Madrid or Manchester City.

Stamford Bridge was the venue of a shock 4-1 defeat to Brentford at the weekend and the ‘Blues’ were hoping no hangover would exist against the sterner test of 13-time UEFA Champions League (UCL) winners Real Madrid.

Big-game player Kai Havertz blazed over early on when played through by N’Golo Kanté, but it was ‘Los Blancos’ man-of-the-moment Benzema who was out to write the headlines, as he had done single-handedly in the miraculous last round comeback in Paris.

Benzema set Vinícius Júnior free down the left after a clever one-two, before Vinícius pulled the ball back towards the incoming Benzema, whose header from a distance flew past Edouard Mendy before he could even lift a glove.

The Frenchman then remarkably made it five goals in 53 minutes of UCL play, this time pulling off the back of Thiago Silva and meeting Luka Modrić’s inch-perfect cross to guide home for his 36th in all competitions.

Shell-shocked Chelsea knew the next goal would make or break this tie, which made for a frantic first half. The ‘Blues’ proved it wasn’t over yet as Havertz pulled one back, heading across ex-Chelsea keeper Thibaut Courtois and into the net following a Jorginho quarter-back style ball.

Chelsea rang the changes at HT, but remarkably, went 3-1 down within a minute of the restart. A long pass over the top should have been dealt with comfortably, but Mendy made an unforced error as the ball got caught under his studs, allowing Benzema to roll home and become only the fourth player to score successive UCL hat-tricks.

‘Blues’ captain César Azpilicueta almost provided an immediate response with a 25-yard drive heading for the top corner, but he was denied by a strong top-handed Courtois wonder save. Low on confidence, substitute Romelu Lukaku then headed wide from six-yards out when it was easier to score, perhaps summing up Chelsea’s evening.

The Londoners now face a huge uphill challenge away at the Santiago Bernabéu, running the risk of being eliminated at this stage for the first time since losing to Manchester United in 2010/11.