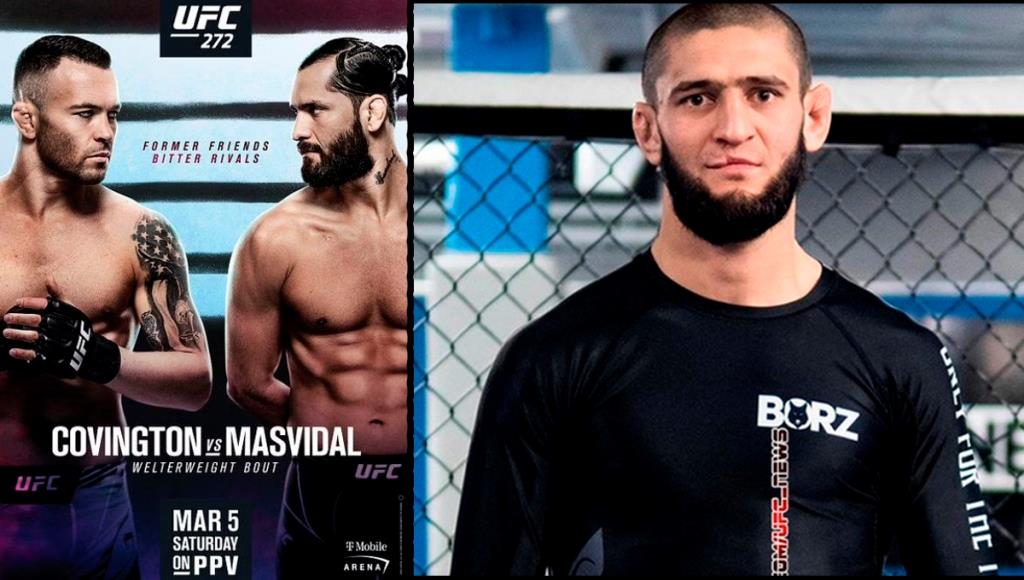 Khamzat Chimaev feels the upcoming matchup between Jorge Masvidal and Colby Covington is going to be a tight affair. While ‘Borz’ believes both fighters have a good chance of emerging victorious, he considers Masvidal a “slight favorite.”

During a recent interview with RT Sport, Chimaev weighed in on the upcoming UFC 272 headliner between Masvidal and Covington. According to the undefeated fighter, the former teammates will put up a great show for the fans. He said:

“I think they will give us a great fight. Masvidal is a slight favorite for me. But Colby is also a tough guy. He fights well. We’ll see. It’s 50-50. I don’t care which one of them wins.”

Chimaev is expected to take on former welterweight title challenger Gilbert Burns at UFC 273 in April. If he manages to get past ‘Durinho’, the Russian-born Swede intends to take on the winner of the clash between Masvidal and Covington. He added:

“I’m fighting Burns now. After beating Burns, hopefully I will fight the winner of Masvidal vs. Covington because it seems like Usman has an injury and needs time to recover.”

Khamzat Chimaev confirms rumors about his visa issues are fake

Over the past few weeks, rumors about Khamzat Chimaev being denied permission to enter the United States have been doing the rounds on social media.

According to Sport 24, Chimaev was denied entry into the U.S. in January, earlier this year. This gave rise to speculation that the Swede’s visa was canceled due to his relationship with Ramzan Kadyrov, head of the Chechen republic.

Chimaev has clarified that all such rumors are fake and that he will soon fly to the U.S. to extend his visa. He shared that the UFC is working on extending his current visa because it is set to expire in March, saying:

“I have been to the U.S. thrice and never had any trouble. They even recognized me at the Customs. Never had a single problem with it. My current visa expires in March so the UFC and my manager are currently working on it now. So most likely I will fly over there soon and extend my visa there.”