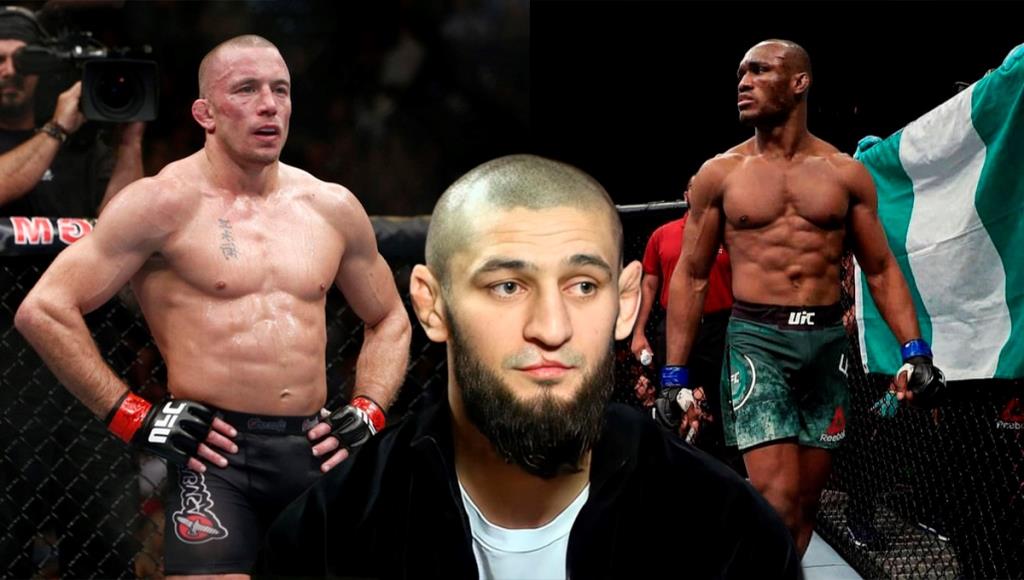 Khamzat Chimaev believes Kamaru Usman is yet to surpass Georges St-Pierre as the welterweight GOAT (Greatest Of All Time).

Speaking to RT Sport MMA, Chimaev alluded to St-Perre’s status as a former two-division champion while comparing both fighters’ legacies. The rising star highlighted that Usman must win a UFC world title in another weight class to ascend to the UFC Hall of Famer’s level.

“Kamaru has been the champion at one weight. Georges has done it at two or three weight classes, right? So, if Kamaru does what GSP did, then he will catch up with him. If he does more, he will surpass him.”

Kamaru Usman became the UFC welterweight champion in 2019 following a unanimous decision victory over Tyron Woodley. ‘The Nigerian Nightmare’ has defended his belt five times since. He is set to take on surging English contender Leon Edwards next.

Georges St-Pierre recorded nine successful UFC welterweight title defenses during his time atop the 170 lbs weight class. St-Pierre vacated the belt following his split-decision win over Johny Hendricks in 2013. He returned to the octagon one final time in 2017 to take on then-middleweight champion Michael Bisping.

‘Rush’ choked out Bisping in the third round of their bout to solidify his status as one of the greatest fighters of all time.

The consensus is that Chimaev is likely to face top-tier welterweight Gilbert Burns next at UFC 273 on April 9th. However, this fight is yet to be officially announced by the UFC.

Many believe that a win over the No.2-ranked Burns could earn the Russian-born Swede a shot at Kamaru Usman’s UFC welterweight title later this year.

Chimaev has issued multiple call-outs to Usman as of late. He has promised to dethrone the dominant welterweight kingpin.

Usman recently underwent hand surgery and is expected to be out of action for a few months. Speaking to Jim Rome, the reigning champion responded to Chimaev repeatedly calling him out. ‘The Nigerian Nightmare’ said:

“That’s the thing, there’s a reason there’s a structure to get here. He’s done great with the opposition he’s been presented and by the time he gets here, once he gets here, of course, we’ll have that conversation. But I am the champion, I am the pound for pound best in the world, I am the king of the castle. Everybody wants a piece of me. That’s good, I like that. These guys have to call me out and these guys have to come to me. When they make it up here, I’ll be here waiting.”