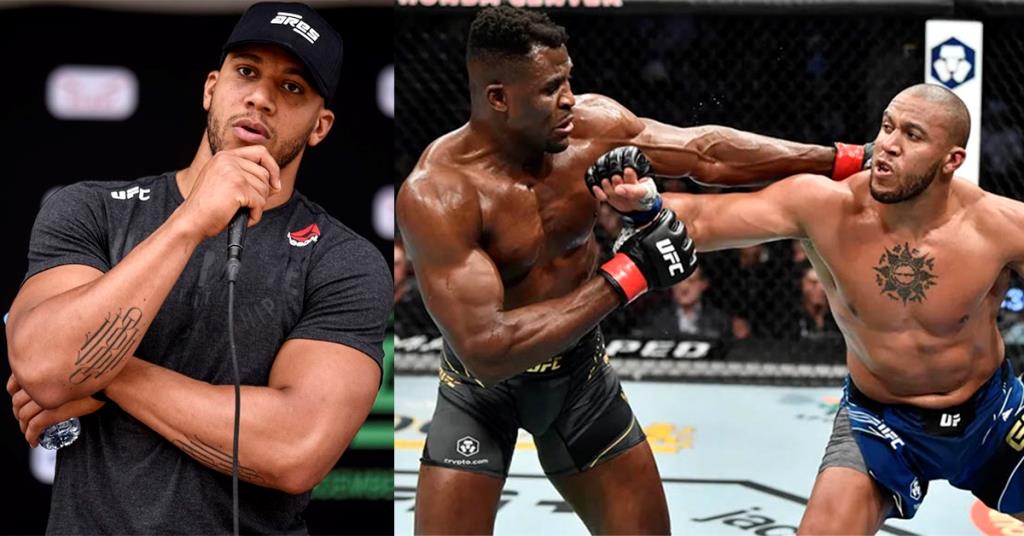 Ciryl Gane explained what is most appealing about a potential second fight with Francis Ngannou.

Ciryl Gane and Francis Ngannou have dominated the UFC’s heavyweight division for the past few years, and it seems inevitable that they’ll fight more than once.

But Gane isn’t so sure.

“Bon Gamin” dropped a unanimous decision to Ngannou in the heavyweight championship unification main event of UFC 270, giving Gane his first loss and leaving the division in limbo as Ngannou sits on the sidelines amid a contract dispute and recovery from knee surgery that is expected to keep him out of action for the majority of 2022.

During a recent appearance on The MMA Hour, Gane said he learned about himself from the loss and explained what is most appealing about a potential second fight with Ngannou.

“I saw that I’m a competitor,” Ciryl Gane said. “Before the defeat, was not sure, but now I’m sure I’m a competitor. So that’s why when the fight finished, I was a little bit sad for the result, because we were really close to the win, so that’s why I was a little bit sad, but after a few hours, after talking with my friends, with my family, it was good.

“You see, I never lost before,” he continued. “I never have this feeling, so that’s why every time in the media, I say, ‘Yes, I’m not afraid about the defeat, I was sure.’ And this is true, I’m not afraid about that, that’s true. But I didn’t know what is the feeling [of defeat] exactly, so now I know. Just that. You see, that’s why I have to have my revenge, because I’m a competitor. It’s not about the bonus of the belt or anything, it’s just because I’m a competitor and Francis is the first guy against whom I lose, so that’s why.”

Ciryl Gane already knocked off top contenders Derrick Lewis, Alexander Volkov, and Jairzinho Rozenstruik in lopsided fashion to earn an interim title and set up his clash with Ngannou, so it’s likely that he doesn’t have to do much to convince the UFC that he’s worthy of another crack at his onetime training partner.

However, asked if he would regret not getting a chance at revenge should Ngannou end up parting ways with the UFC, Gane sounded at peace with that possibility.

“I’m OK already with the situation,” Gane said. “I’ve got this in my mind, maybe I never fight again against Francis anyway, because I did a really great fight and for me, I lost, but not too much. It was just a little mistake. For me, I was better in the striking, in the ground game, but for me, I was better. I know this is a little bit strange to say that, but I was better on my wrestling too if you compare the technique, if you compare something like that. The takedown he did and my takedown was a little bit different.

“So that’s why I’m OK if I never fight again with Francis. I’m OK. I know I can compare me with him and I know I’m OK, I’m a good fighter.”

According to Ciryl Gane, they exchanged respectful words afterward and he’s received plenty of positive support since taking his first loss.

“We did a war, it was a beautiful war,” Gane said. “He won, I lose. Anyway, we did a great fight, the people, the fans were really happy about this show in my country. The people are really proud of me. ‘You did something big. You see, Francis is not an easy fighter, he’s a tough fighter, so congratulations. You did well. You did better than a lot of fighters after just three years in the game. Keep your head up.’ All the people were really kind with me.”

Ciryl Gane said that he is confident he will the UFC champion someday, but for now his focus is on improving on his fight with Ngannou and getting back into the gym to learn new techniques.

And much like if a second Ngannou fight never happens, Ciryl Gane will sleep easy if his UFC run ends without him ever having undisputed gold around his waist.

“Never, because this is just the consequence if you win,” Gane said. “But you must be focused on your fight, on your opponent. This is a mission to win the fight. That’s why my mission now, that’s why I ask the revenge against Francis because I just want to have the win after the fight. That’s it. And after, yes, you have the belt, you have something good, but you see I just started this game and that’s why maybe I’m never dreaming about that.”

“I don’t know exactly if it’s because I’m a Bon Gamin,” he added. “I think just because, sorry for the word, I don’t give a sh*t about all much things.”