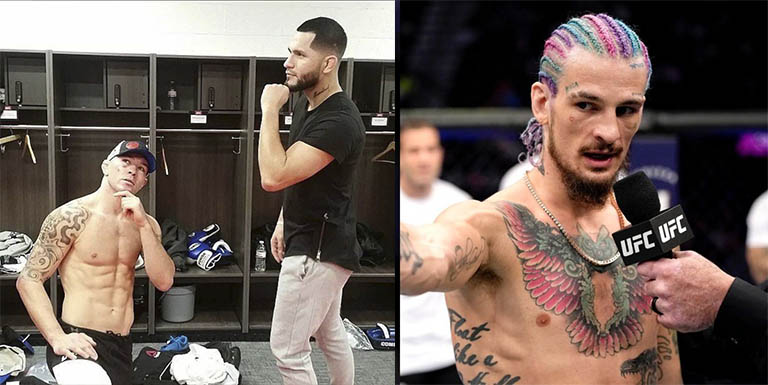 Sean O’Malley recently spoke about the altercation between Colby Covington and Jorge Masvidal outside the Papi Steak Restaurant in Miami.

During a recent appearance on Theo Von’s This Past Weekend podcast, ‘Sugar’ said that it was not a good look for Masvidal to attack Covington the way he did. However, he also stated how fans loved it when ‘Gamebred’ was involved in a backstage scuffle with Leon Edwards in 2019:

Jorge Masvidal sucker-punched Colby Covington twice as ‘Chaos’ came out of a restaurant in Miami, a few days after their fight at UFC 272. The Miami native was also involved in a confrontation with Edwards three years ago.

After his win over Darren Till at UFC London in 2019, Jorge Masvidal was giving a backstage interview to ESPN’s Laura Sanko. Leon Edwards, who had won against Gunnar Nelson that night, passed by and directed some comments towards ‘Gamebred’.

Masvidal walked up to the Englishman and punched him. That left ‘Rocky’ bloodied. However, unlike Covington, Edwards didn’t press any charges against the BMF champion.

Watch the altercation between Jorge Masvidal and Leon Edwards:

‘Chaos’ has pressed charges against his former roommate to the Miami Beach Police. He reported to the police that Masvidal punched him twice, leaving him with a broken tooth and an abrasion on his wrist. The No.1-ranked welterweight also reported a damage of $15,000 to his $90,000 Rolex watch.

‘Gamebred’ was taken into custody and has since been released on a $15,000 bond. He has been accused of a second-degree felony for agravated battery. Masvidal could face up to 15-years jail time for that charge. He is also facing a third-degree battery for criminal mischief offenses.

Many fighters have voiced their opinions on the altercation. While the general consensus is that Masvidal should have handled things differently, most are in agreement that Covington’s pre-fight trash-talk crossed the line. How this saga eventually plays out remains to be seen.