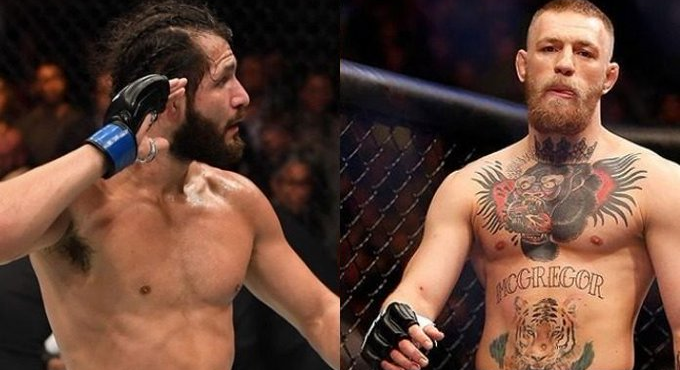 Conor McGregor has fired back at Jorge Masvidal after ‘Gamebred’ called him a steroid-using “little boy” in a recent interview.

“An absolute pigeon brain this guy is. Stupid beyond belief.”

While McGregor didn’t specifically mention Jorge Masvidal’s recent verbal attacks on him, it’s hard to imagine he’d be responding to anything else. The ESPN Desportes interview that came out the day before had Masvidal saying:

“I would love to fight him at 170 pounds, but I don’t wait for anyone,” Masvidal said when asked about McGregor. “If he wants to do it, I’ll break his face, if he doesn’t want to do it, let him come next.”

In the end, Masvidal just doesn’t believe McGregor would actually face him in the cage.

“He is false, he knows that I am a man who hits hard and that I come to kill, I do not come to play hug in the cage, I am going to give everything inside me to kill him, and I have a little size, although now he’s injecting steroids and all kinds of things. But, he is still a little boy.”

Another potential fight for Masvidal that would be great is a showdown against Gilbert Burns. Burns recently called out Masvidal, who responded positively to the idea. Now, all “Gamebred” needs to do is beat the rap on this felony battery charge.

Conor McGregor is also unable to fight for the foreseeable future as he recovers from a bad leg break injury suffered in July 2021.

There’s speculation that McGregor removed himself from the USADA testing pool during his recovery period, as ‘The Notorious’ hasn’t been tested once in 2022. Not only would that delay his return by six months from the date he re-enters the program, it may explain why Masvidal is accusing him of using steroids.

A fight between Conor McGregor and Jorge Masvidal is something that was discussed by McGregor and UFC president Dana White back in 2019. At the time, the Irish sports star was preparing for his first fight since losing to Khabib Nurmagomedov in October 2018. Speaking to the press, White said: